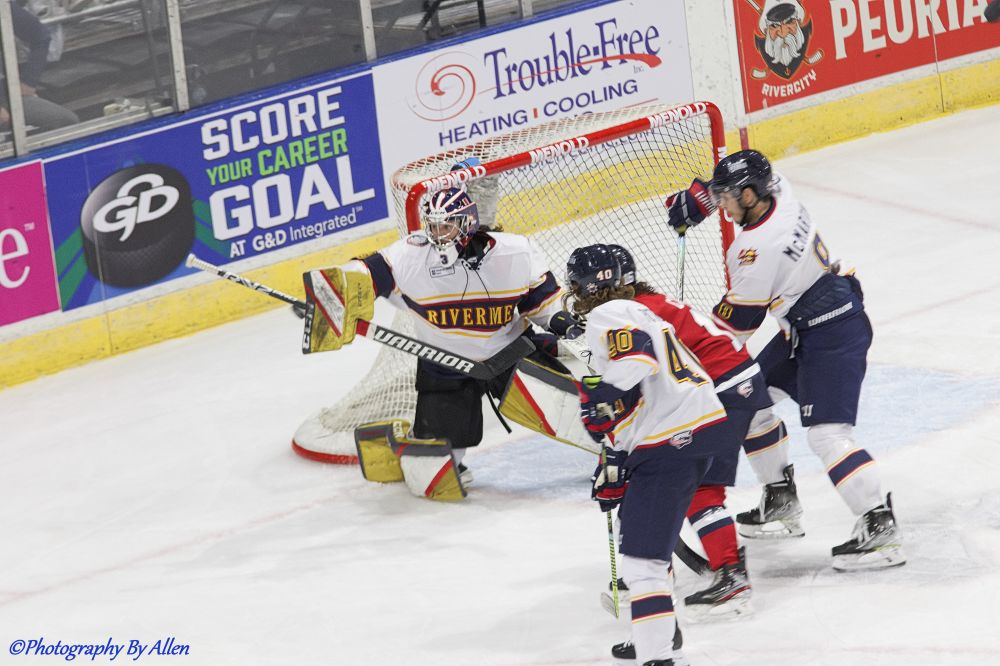 Peoria, IL – It was 593 days since the Peoria Rivermen took the Carver Arena ice, and the home team welcomed the Macon Mayhem to Peoria for the 40th season home opener Friday night. Peoria got a 35 save shut out from goaltender Eric Levine, and a pair of goals from Tanner Hildebrandt en-route to a 6-0 SPHL victory. With the win, the Rivermen start the 2021/22 season 1-0-0.

The Rivermen jumped out to a quick 1-0 lead in the early stages of the opening period when Nate Chasteen slipped a pass to the top of the right circle where Tanner Hildebrandt was stationed. Hildebrandt collected the pass and snapped a shot over the shoulder of Mayhem goaltender Luke Cohen at 3:30 of the first period for the 1-0 Rivermen edge.

Peoria added to their lead just 61 seconds later when Hildebrandt shot the puck towards the Macon net and J.M. Piotrowski tipped the puck just past the outstretched pad of Cohen at 4:31 of the first period for the 2-0 Rivermen advantage.

Peoria extended their lead in the middle frame with a pair of goals in the early stages of the stanza. The first coming on the power play. With Don Carter Jr. serving a tripping penalty, Baer put a shot towards the net that was tipped past Cohen by Cody Dion for the power-play marker at 27 of the second period and 4-0 Rivermen lead. The Rivermen added their second goal of the period just:36 later when Hildebrandt snapped home his second of the game past new Mayhem goaltender Michael Siliadis for the 5-0 Rivermen advantage.

The Rivermen added to their lead late in the third period when Mike Laidley tipped in an Alec Hagaman rebound at 14:22 for the eventual 6-0 final score.

Eric Levine recorded the victory in goal, stopping all 35 shots faced, with the win between the pipes Levine starts the season 1-0-0.

Notes: Eric Levine recorded his 6th career shutout in a Rivermen uniform and 8th career SPHL clean slate…Mike Laidley tallied his first career SPHL goal in the contest…Tanner Hildebrandt recorded his first career multi-point SPHL game…The Peoria penalty kill was a perfect 5/5 on the night…Mathieu Cloutier picked up his first pro point, and assist on the 6th Rivermen goal…Peoria is now 6-2-0 in home openers as members of the SPHL…The Rivermen return to action Saturday night when they wrap up the two-game weekend series with the Macon Mayhem at Carver Arena…Saturday’s game starts at 7:15 Central Time…

Group, single game, and season tickets for Peoria's 40th season of professional hockey presented by Midwest Orthopaedic Center are on sale at the Toyota Box Office in the Peoria Civic Center, or by phone at the Rivermen office, located at 201 S.W. Jefferson Street, or over the phone at (309) 676-1040. For the latest Rivermen news and notes, follow online at www.rivermen.net or through Facebook (www.facebook.com/PeoriaRivermen) - Twitter(https://twitter.com/Peoria_Rivermen)