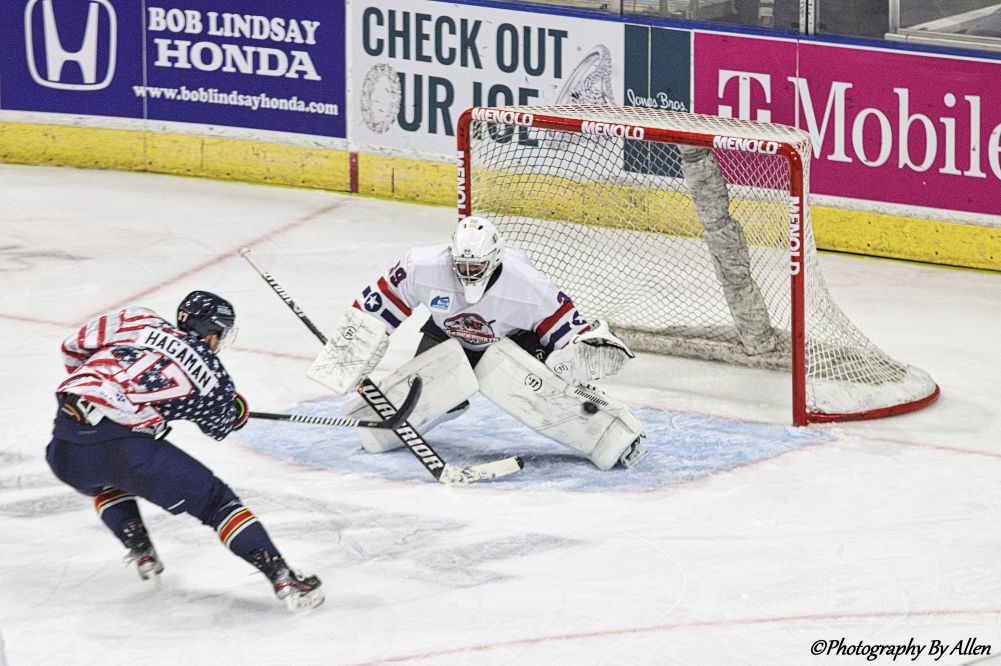 It was a scoreless first period between the two rivals, both of whom are undefeated when scoring the first goal of a game. It was during a period of four-on-four play in the second, that the Rivermen broke through when they needed to the most. A long stretch pass from Paul Deslauriers, in his own zone, found Hagaman in stride at the Thunderbolt blue line. In on a breakaway, Hagaman elected to shoot instead of deke and his shot found the back of the net as it zipped past Evansville netminder Brian Billett.

Peoria took a 1-0 lead into the second intermission. At the start of the third period, Evansville got the equalizer just 28 seconds in off of a two-on-one rush. But the Rivermen, undaunted, soldiered on and responded less than three minutes later.

A hard shot from defenseman Brandon McMartin from the left point sailed toward the right post, deflecting off the iron and into the back of the net. McMartin’s first of the year put the Rivermen back on top 2-1, and it was a lead they refused to yield.

In the final minute of regulation, facing six attackers and an empty net in front of him. Hagaman won a key face-off to himself in his own zone. He was able to get the puck just shy of his own blue line and sent a shot all the way down the ice and into the empty net. Hagaman's second goal of the game sealed a hard-fought and emotional 3-1 victory for the Rivermen.

With the win, Peoria improves to 3-2-0-0 on the season and 3-1 at Carver Arena. Just as they were able to get a little payback against Evansville a week after a loss, the Rivermen will look to do the same on the road against Quad City on Friday night (November 12) starting at 7:10 pm.

STATS: Hagaman’s two-goal night puts him tied with Tanner Hildebrandt for the team lead in goals (3) and puts in the lead for the Rivermen in points (5). Paul Deslauriers continues to be active in the Rivermen offense as he now has an assist in each of his three games in a Peoria uniform. The Rivermen continue to be undefeated when scoring the first goal (3-0) and when scoring two goals or more (3-0). The Rivermen improve to a 35-6-1-6 record against Evansville after Saturday’s win.