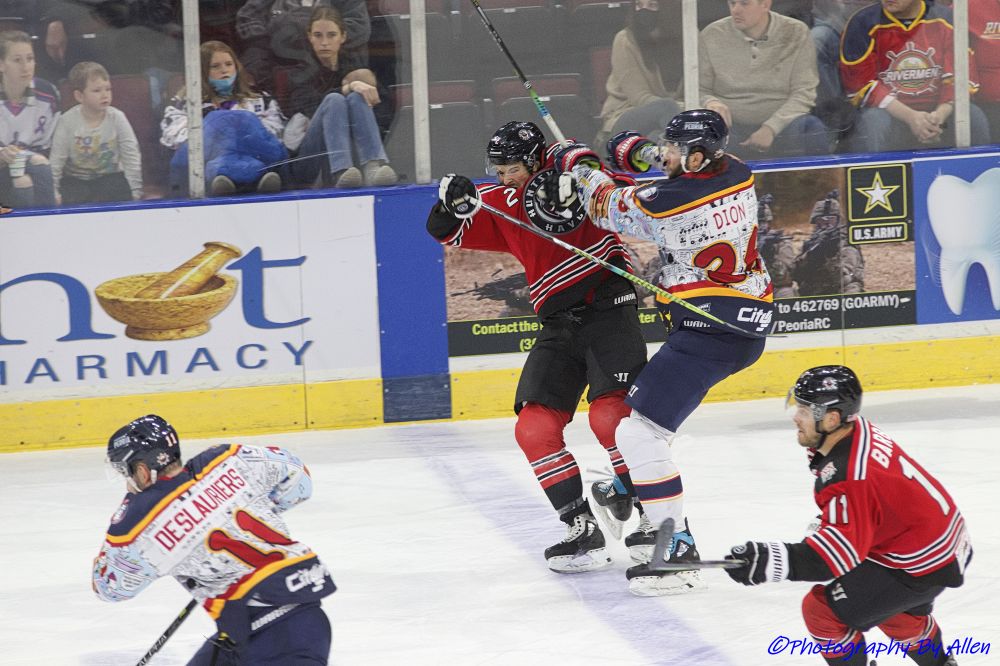 PEORIA, IL – The Rivermen did everything they needed to do on Friday night. They had good goaltending, they limited the impact of the Havoc’s top scorers, and they kept Huntsville as a whole to just two goals. That put them in a position to win. Unfortunately, they could not stop the Havoc’s date with history as the Rivermen fell 3-2 to the Havoc in the shootout and watched as Huntsville set a new record for the best start (12-0-0) in Southern Professional Hockey League history.

The Rivermen got the start they wanted in the first period as J.M. Piotrowski send a pass from behind the net out front to a waiting Paul Deslauriers who buried a one-timer to record his first professional hockey league goal in North America.

The Rivermen, netting the first goal for the second game in a row, surged on in the second period and was able to extend their lead to 2-0. A point shot by newcomer Chris Allemon found its way into the net through a mass of bodies in front. Allemon, playing in his first game as a Rivermen, also scored his first professional goal.

But the Havoc, whose offense ranks first in the SPHL, fought back with two goals in the second and early third periods to tie the game 2-2. The first came on an odd-man rush, the other after a point-shot. Both goals were scored off of rebounds.

The Rivermen were forced to go into overtime for the first time this season. Huntsville had the advantage in time-of-possession, but Rivermen netminder Eric Levine was stout and stood tall making four saves. Peoria surged in the later stages and had their best chance of the night as newcomer Marcel Godbout received a pass right on the doorstep of the crease. However, Godbout could not find the back of the net from in tight and the game was decided in the shootout.

Huntsville, the best shootout team in the league, showed why as they emerged victorious three goals to one in order to earn the extra point and the historic victory.

Despite the loss, the game was a positive stepping stone in the emergence of young depth scorers, the successful execution of a game plan, and the evidence that Huntsville is beatable. It all just requires one more timely goal. All of Peoria’s losses this year so far have been decided by one goal, not counting empty-net goals.

The Rivermen will look to split the weekend of the finale of Peanuts Weekend on Saturday night at Carver Arena. Face-off is set for 7:15 pm.