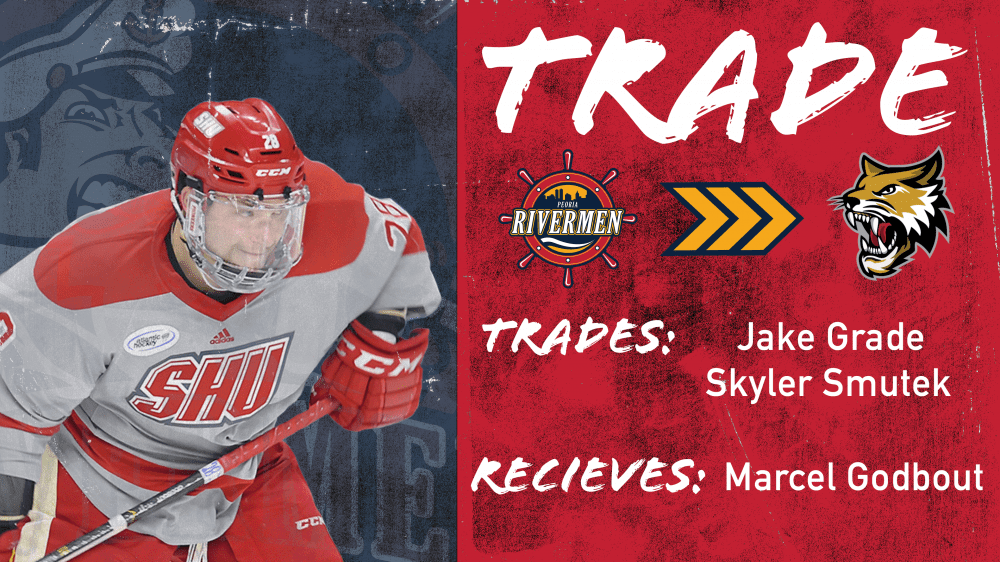 PEORIA, IL – The Rivermen announced on Thursday that they have completed a trade with the Vermilion County Bobcats that sends defensemen Jake Grade and Skyler Smutek to Danville in exchange for forward Marcel Godbout.

Godbout, a native of Center Line, Michigan, played division one college hockey for three years with Sacred Heart University. In the 2020-21 season Godbout played for the Pensacola Ice Flyers for nine games and was a part of their Championship team along with current teammate, and Rivermen captain Alec Hagaman. Godbout made an impact in his nine games with the Ice Flyers, netting three goals an assist for four points. Godbout has not suited up for Vermilion County yet this season.

In exchange for the young forward, the Rivermen have sent two defensemen, Grade and Smutek, to the Bobcats. Grade was picked up off of waivers by the Rivermen at the end of October after he was released by Evansville. He accumulated no points and was a minus-two in three games for Peoria. Smutek has been around the Southern Professional Hockey League since the 17-18 season. His best year was in the 2019-20 season when he netted 10 assists for Peoria. Vermilion will be the fifth team he will suit up for in the SPHL.

The Rivermen are on the road this Friday for their only contest of the week as they visit the Quad City Storm at the TaxSlayer Center. The Rivermen are 0-1-0 against their rival from Quad City this season. Face-off is set for 7:10 pm.