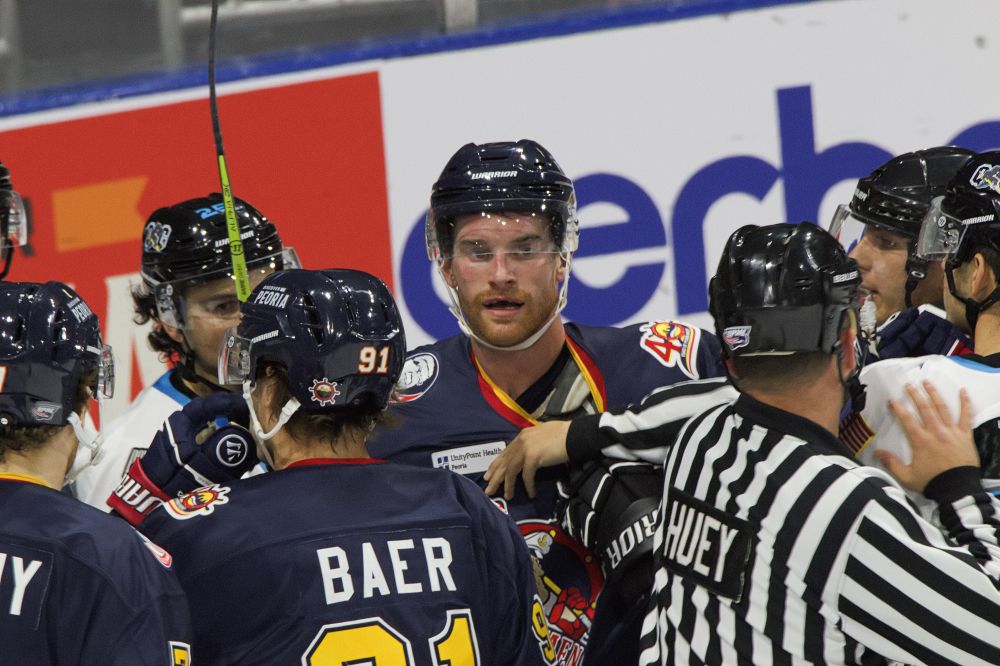 PEORIA, IL – Once again, the Rivermen found themselves trying to come from behind in a close game. Once again, they had their chances to score. But for the second straight game, they could not find the equalizer as the Peoria Rivermen fell to the Quad City Storm 2-1 at Carver Arena on Friday night.

The contest started off poorly for Peoria as Quad City was able to capitalize on their first power-play chance of the game to take a 1-0 lead early on in the contest.  The Rivermen had several opportunities to answer back on the power play but failed to do so.

In the second and third periods, it was largely the performance of Rivermen netminder Eric Levine who kept Peoria within striking distance. Levine made big save after big save on both even strength and power-play chances for Quad City. It seemed like Friday was going to be another one of those games where it seems almost nothing could beat the eight-year veteran. But unfortunately, a second shot did.

A heavy shot from the point was initially saved by Levine but fluttered through his equipment and trickled into the back of the net. Despite their netminder’s heroics, the Rivermen found themselves down 2-0 heading into the third period.

In the third, the Rivermen found life as they took the play to the Storm and finally saw the power play re-emerge. Mathieu Cloutier was able to jam home a rebound on Peoria’s fifth power play of the game to secure his second goal of the season and pulled the Rivermen to within one. Trailing 2-1. Peoria got a second power play late in the game and pulled the goaltender to try and draw even. But like last Saturday, they could not find the back of the net and fell to Quad City, at home, for the first time since 2007.

Though the loss stings, there is still plenty of games to be played as the Rivermen look to solidify their roster after several injuries and key contributors placed on the 21-day Injured Reserve. Peoria will look to bounce back against another old rival in the Evansville Thunderbolts on Saturday night. Face-off is set for 7:15 pm.

QUICK STATS:  Eric Levine stopped 26 of 28 Quad City shots. Friday was the first win for Quad City this season while being out-shot and their first victory in Peoria as the Quad City Storm. Peoria ended their two-game power-play goal drought and finished 1/6 on the man advantage. Quad City finished 1/3 on the power play. Storm netminder Bailey Brkin improved to a perfect 4-0 record on the season.