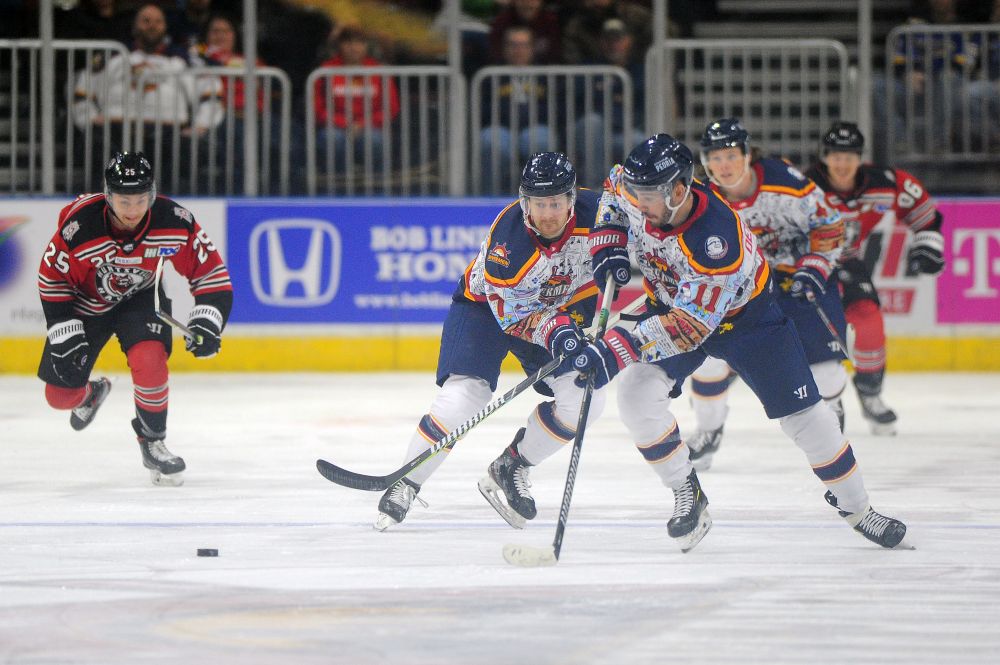 EVANSVILLE, IN – The Rivermen set off a bunch of fireworks offensively on Friday night against the Evansville Thunderbolts. Paul-Antoine Deslauriers’ three-goal night put Peoria in a celebratory mood as the Rivermen routed the Thunderbolts 4-1 at the Ford Center.

The first period did not start off as well as the Rivermen would’ve liked as they surrendered the first of the game just over five minutes in on a short-angle shot. Though Peoria rallied and was able to answer a few minutes later. A long pass found Deslauriers in stride and on a break-away from the blue line in. Deslauriers didn’t waste time with a deke and instead just shot the puck into the back of the net to secure his first of the night to tie the game at 1-1.

The second period was more to Peoria’s liking as they were able to score two goals in 70 seconds to take a 3-1 lead. The first goal came on the power play as Alec Baer, back in the lineup after missing time due to injury, skated to his right and found a wide-open Alec Hagaman on the back door. Baer slipped a pass to Hagaman who tapped the puck into a wide-open net to secure the captain’s first point of the night.

Just over a minute later, Hagaman found himself on a two-on-one rush with Deslauriers. Hagaman slipped Deslauriers the puck and the Quebec native made no mistake, rifling in a shot that beat the Evansville netminder high-blocker side.

Up 3-1 going into the third period, the Rivermen added one more goal to secure the game and put it completely out of hand. Deslauriers again found himself with the puck, this time in tight, and was able to get a shot off from a short angle at the base of the right-wing circle. His shot found the back of the net yet again and Deslauriers became just the second active Rivermen to score a hat trick this season.

With the victory, the Rivermen have earned their sixth straight victory of the season and extended their point streak to 12 games, tying the season-high set by Quad City and Huntsville. The Rivermen will look for their seventh win in a row as they play Evansville in their second game of a three-in-three series. Face-off for Saturday’s contest is set for 7:15 pm.