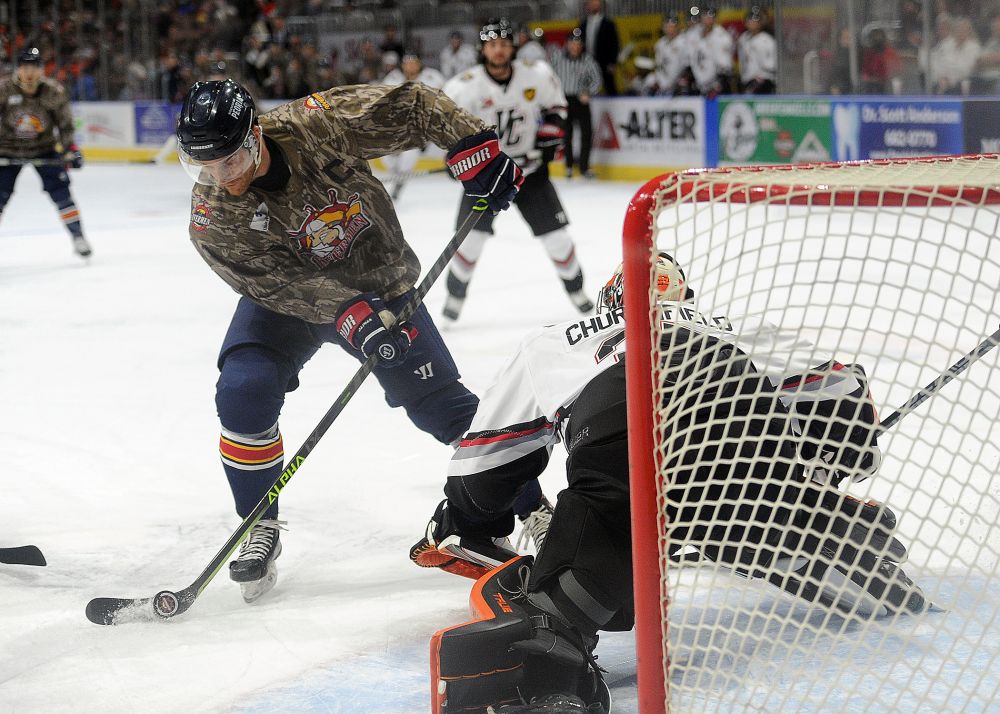 PEORIA, IL – There is no place like home for the holidays, and for the Rivermen that old axiom coined in 1954 held true in 2021. The Rivermen defeated Vermilion County 6-1 at Carver Arena on Saturday night to earn their fourth straight victory heading into the holiday break.

It was a bit more of an even matchup in the first period between the two sides, but that changed when Mike Laidley was able to cash in on a rebound with just 40 seconds left in the opening frame. Laidley’s goal was followed up at the horn by a heavyweight fight between Cody Dion and Bobcat defenseman Ned Simpson. Both players clocked in at over 200 pounds and stood over six feet tall. Dion won the bout handily and gave the Rivermen even more momentum after the first period.

After a brief time in the second period that saw Vermilion County fight back, the Rivermen rallied and took control of the game. A two-on-one with Mathieu Cloutier and Paul Deslauriers turned into an important goal that extended the Rivermen lead to 2-0. After that goal, the Rivermen loosened up and played more freely and it led to near dominance on the ice.

The Rivermen extend their lead to 3-0 thanks to Marcel Godbout’s quick release in the high slot ten minutes later that marked his second goal in as many nights (Godbout was credited with the shootout winner on Friday).

In the third period, the Rivermen continued their offensive onslaught and poured on the pressure. Goals by Cloutier, Chris Allemon, and Zach Wilkie extended the Rivermen lead to 6-0. The last goal by Wilkie, off a point shot, marked his first goal in professional hockey. The Bobcats were able to get one goal back off a deflection right in front, but all it did was rob Eric Levine of the shutout. Overall, Vermilion was held to just two shots in the third period

By the end of the night, Peoria held fast and cruised to a win over the same opponent who earned their first-ever franchise victory against them just before Thanksgiving.

Not only did Saturday’s win mark the fourth straight victory for the Rivermen, but it also marked the tenth straight game in which the Rivermen have earned at least a point. This streak is the longest active in the Southern Professional Hockey League, just two games shy of the current season-high of 12. Furthermore, Peoria continues to remain perfect at home on Saturday night, a point of pride and emphasis in their locker room.

With depth scoring emerging, confidence rising, and points being earned at an impeccable rate, the Rivermen hit the holiday season right where they needed to be, right about where Coach Jean-Guy Trudel wanted them. They are now in a firm position to attack the heart of their schedule, playing true Rivermen hockey. It’s a brand with which they know they can win.