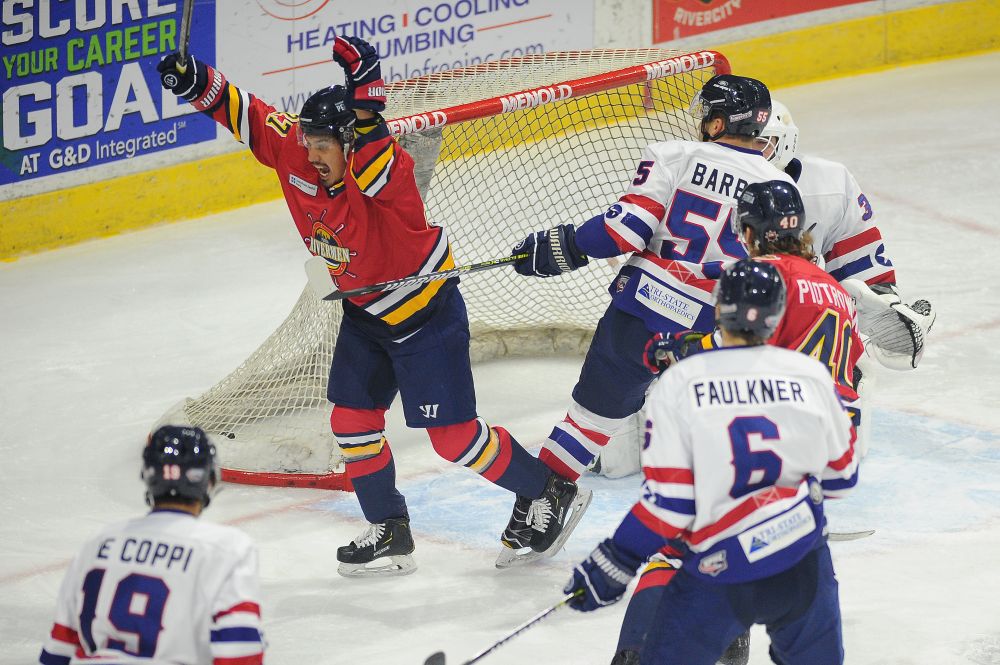 PEORIA, IL – By the end of Friday night, Francesco Corona had just two goals to his credit this season. But his latest one was by far his most important. Corona’s game-winner at the 2:02 mark of overtime sent the Rivermen and their fans ablaze with jubilation and the Quad City Storm dejected after falling 3-2 to Peoria in overtime at Carver Arena.

Like on last Sunday, the Rivermen surrendered the first goal of the game as Quad City was able to score just after killing off a Rivermen power play to make it 1-0. But unlike last Sunday, the Rivermen had a quick answer as they were able to draw even soon afterward. Dale Deon led a two-on-two rush with Mitch McPherson up the ice and into the attacking zone. McPherson drove to the high slot, taking away the eyes of Storm netminder Breandan Colgan, thus allowing Deon to send a hard shot that deflected off of the cross-bar and into the back of the net. Deon’s second goal of the season evened the game at 1-1.

The second period saw the Rivermen secure the lead as Alec Hagaman led the charge. Skating to his right, he saucered a pass to Alec Baer who got a quick shot on net from the base of the right-wing circle. But the shot produced a rebound, one that Paul-Antoine Deslauriers made no mistake on as he shot the puck into a wide-open net to secure his eighth goal of the season and the 2-1 lead. The last ten minutes of the period saw the Rivermen dominate as they had scoring chance after scoring chance, including several by Marcel Godbout, but were unable to extend their lead.

The Rivermen continued to have chances to extend their lead in the third but came up empty. It was instead the Storm who were able to capitalize on a rebound and tie the game 2-2 in the mid-stages of the third period. In the final minutes of the third, the Rivermen found themselves on a five-on-three disadvantage. Despite the long odds and the desperation of the Storm attackers, the Rivermen held off the SPHL’s second-ranked power play to force overtime.

Coming into Friday night, the Rivermen had yet to win an overtime game this season, their only post-regulation game that did not end in a shootout was an OT loss to the Storm back in December. But times were about the change. On a rush up the ice and into the attacking zone, Corona dropped the puck off to Hagaman in the middle and streaked to the left side of the net. Hagaman, head up all the way, coasted to the right side of the high slot and then sent a swift pass over to Corona waiting on the back door. Uncovered, Corona made no mistake as he re-directed the pass into the back of the net for Peoria’s first overtime win of the season and fifth straight win at home in 2022. The Rivermen will be off for the rest of the weekend before hosting the Evansville Thunderbolts on Tuesday, January 25. Face-off is set for 7:15 pm.