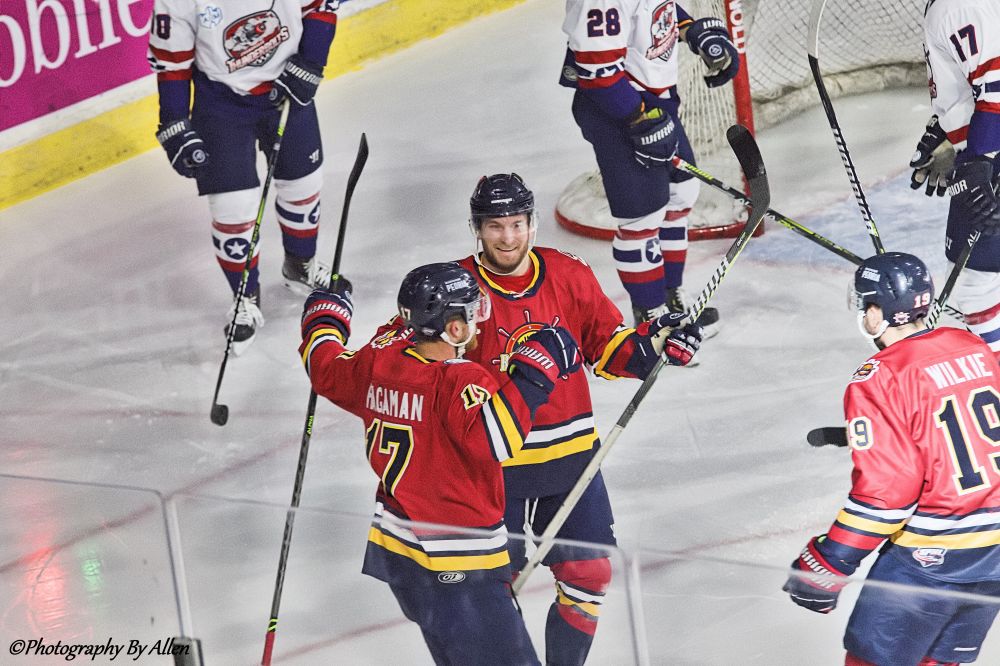 PEORIA, IL – History was made on Sunday night as Alec Hagman became just the 8th player in the Southern Professional Hockey League's history to record 300 career points. It came on the heels of a 6-2 victory for the Rivermen against Evansville to take two games of the three-game weekend series.

Peoria started off strong for the first time all weekend and netted the first goal of the night thanks to J.M. Piotrowski’s wrap-around goal just 102 seconds into the contest. The Rivermen added another goal, assisted by Hagaman, thanks to Dale Deon as he buried a rebound to secure his first-ever goal in a Peoria sweater. The third goal, and the eventual game-winner, came off the stick of Francesco Corona as he deflected a pass in between the legs of Evansville goaltender Brian Billet to record his first goal in the SPHL and extended Peoria’s lead to 3-0.

While Evansville scored late in the first period to make it a 3-1 hockey game, the Rivermen quickly answered in the early stages of the second period. Hagaman made an excellent play to shield the puck from pressure as he stepped in over the Thunderbolt blueline on the right-wing side. Sending a pass to a steaking Corona, Hagaman watched as Corona found Alec Baer with a quick feed to the back door and the tap-in goal for Baer’s third point in as many nights. The secondary assist by Hagaman marked his 300th point in the SPHL, becoming just the second American-born player to reach that milestone.

Peoria added on two more goals by Marcel Godbout that sandwiched a goal by Evansville to take a 6-2 lead into the third period. Despite power-play opportunities for both sides, the scoring was done and Peoria skated off to an emphatic 6-2 victory on home ice, avenging the 7-3 loss they suffered to Evansville the previous evening.

All in all, four separate Rivermen (Hagaman, Corona, Godbout, and Baer) had multi-point games with three more getting on the scoresheet. With the victory, the Rivermen improved to 12-4-1-3 on the season and 9-2-0-1 at home. They will have a tough challenge ahead of them as they travel next week to face the surging Rail Yard Dawgs in Roanoke, Virginia. It will be the first meeting between the two franchises since Peoria’s final game before the COVID-19 shut down in March of 2020.