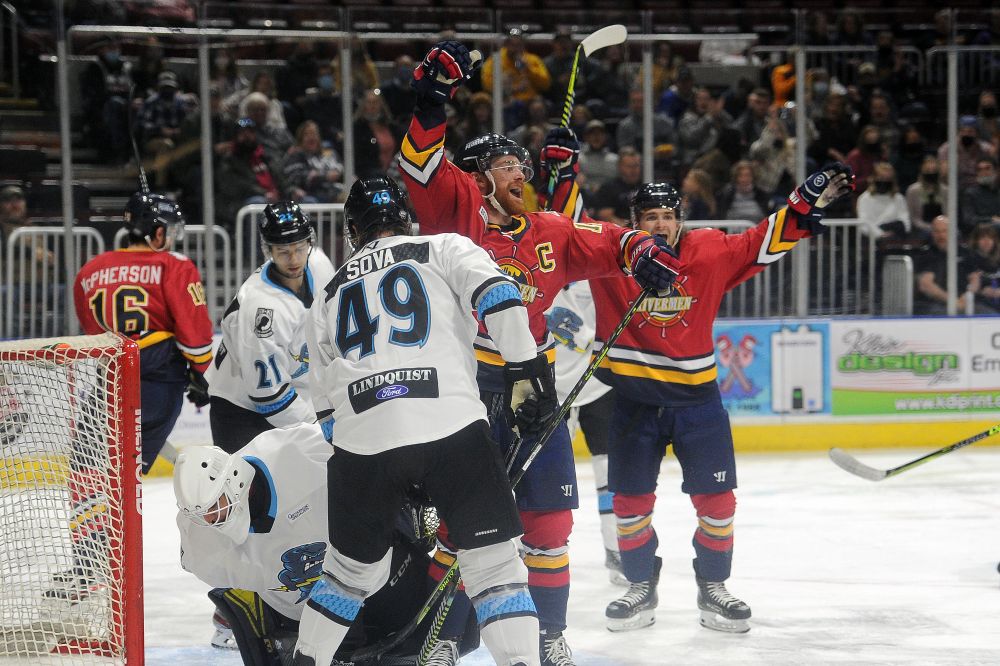 PEORIA, IL – A dominant power play for Peoria was the difference as Quad City’s third-ranked penalty kill unit was no match for the Rivermen. Peoria netted four goals on the man advantage in a 7-4 victory over their rival, the Quad City Storm, on Sunday afternoon at Carver Arena.

A slow start ended up costing the Rivermen as they fell down 2-0 after two short-angle goals by Quad City. The Rivermen thought they had their first goal of the game with about five minutes to go in the period off of a shot by Alec Hagaman, but it was waved off due to goaltender interference. The Rivermen wouldn’t be denied, however, and were able to get on the board in the last two minutes of the period after a hard wrist shot by Paul Deslauriers was able to find its way into the back of the net to pull the Rivermen within one.

The second period saw the Rivermen surge forward thanks to two power-play goals. The first came from Hagaman off of a net-mouth scramble and the second from an accurate shot by Nick Neville, his first of the season, from the right face-off circle. The Storm did not go quietly however as they were able to tie the game on a shot-angle shot from Shane Bennett, his second of the contest.

Going into the third period, both teams had little experience this season when tied going into the final frame. But the Peoria Rivermen took over the contest as they scored four goals in the third period. The first one came off Neville's stick as he was able to jam home a rebound in front to put the Rivermen up 4-3. This was followed up by Mitch McPherson’s 11th goal of the season, also on the power play, as he scored with a shot that deflected in off of the pad of Storm netminder Thomas Proudlock. Up 5-3, the Rivermen weren’t satisfied. Marcel Godbout added on another power-play goal off of a cross-crease feed from Alec Baer to extend the Rivermen lead to 6-3. Overall, Peoria finished 4/6 on the power play on Sunday.

Quad City was able to only muster one power-play goal in response, but that was quickly answered by Alec Hagaman’s second goal of the night on an empty-net tally in the late stages of the game. Overall, the Rivermen dominated the third period en route to a 7-4 victory, netting four goals on seven third period shots. The win marks the fourth time in six games that the Rivermen have scored five goals or more. It also stands as the second straight victory for the Rivermen against Quad City and it moves Peoria into sole possession of fourth place in the Southern Professional Hockey League.

Quad City will return to Peoria on Friday, January 21 for a single game engagement with the Rivermen as Peoria hosts their fourth straight game at Carver Arena, face-off is set for 7:15 pm.