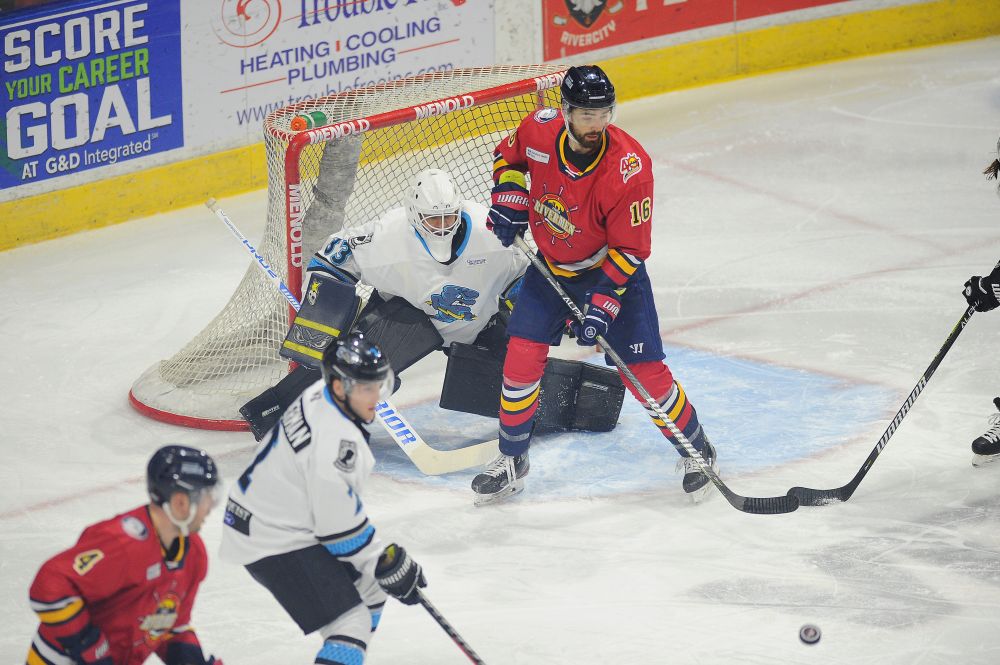 MOLINE, IL – The Peoria Rivermen took control of third place and extended their winning streak to six games after beating the rival Quad City Storm by a score of 4-2 at the TaxSlayer Center on Friday night.

The Rivermen got off to the hot start they wanted as they were able to strike first just over seven minutes into the game. Mike Laidley made a nifty play skating up the right-wing side into the zone, as he hit the half-boards he slowed down and quickly sent a pass to a trailing Alec Hagaman in the high slot. Hagaman’s shot from the middle was true and put the Rivermen up 1-0 on the captain’s 18th goal of the season. This was soon followed up by Paul-Antoine Deslauriers as he received a pass from J.M. Piotrowski in the middle of the left circle. Deslauriers’ shot struck the cross-bar and deflected into the back of the net to give the Rivermen a critical 2-0 lead.

If the first period was dominated by Peoria, the second belonged to Quad City. The Storm were able to capitalize off of a turnover in the Rivermen zone to get their first goal of the game just 105 seconds into the second. Peoria responded though as the number one power play in the SPHL got a chance to operate. Hagaman, with the puck at the base of the left-wing circle, skated to the top of the crease quickly. Waiting for the Storm netminder Kevin Resup to drop into a butterfly stance, Hagaman then skated around the netminder to put the puck into the back of the net for his second of the night. Less than two minutes later the Storm stuck back on an odd-man rush to trim the Rivermen lead to 3-2. Peoria was penned in their own zone as they were forced to kill off a double minor for high-sticking. Eric Levine made several key saves to keep Peoria in the lead and enabled the Rivermen to skate off the critical short-handed situation.

The third period saw the Rivermen special teams again answer the call as they killed off two important penalties against and secured another power-play goal thanks to Marcel Godbout to put the game away. Godbout’s goal, with under two minutes to go, helped Peoria earn a 4-2 victory over the rival Storm. It also places the Rivermen in sole possession of third place in the Southern Professional Hockey League.

Overall, Peoria got the start they wanted on their ten-game road trip. That stand on the road will continue as the Rivermen head to Danville on Saturday night for the start of a Saturday-Sunday set against the Vermilion County Bobcats.