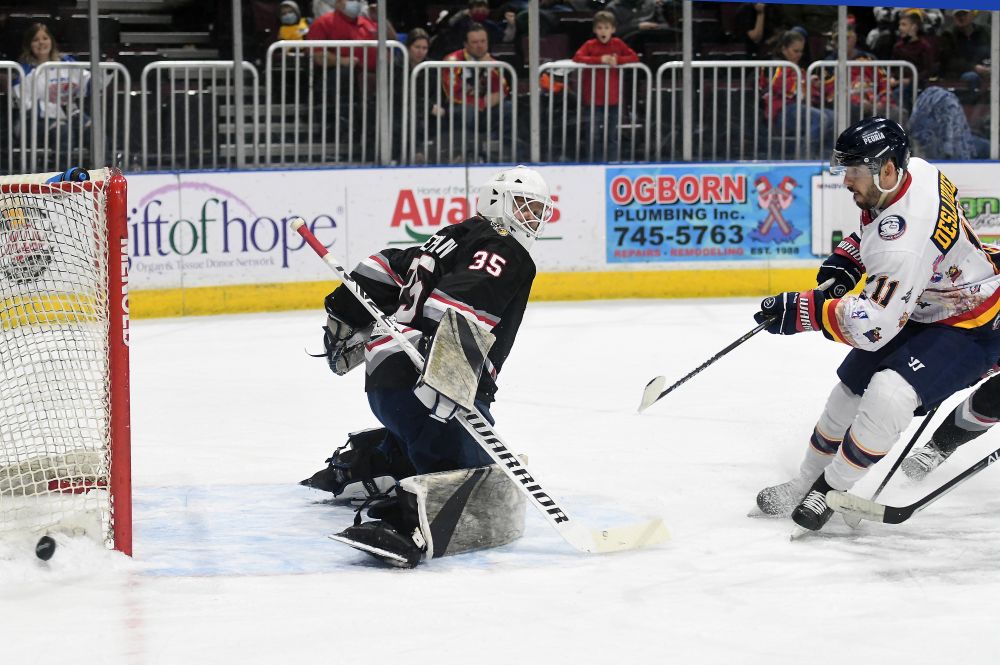 PEORIA, IL – An offensive showcase on Friday was followed up by a suffocating defensive performance on Saturday as the Rivermen limited the Vermilion County Bobcats to just 10 shots and one goal en route to a 3-1 victory at Carver Arena.

The first period saw Vermilion County come out to a faster start than on Friday, but the Rivermen settled in and got the first goal of the game almost ten minutes in as Marcel Godbout sent a shot on net from the base of the left-wing circle. The short-angle shot found its way in behind the goaltender and into the back of the net to put the Rivermen up 1-0. However, the Bobcats struck back as they were able to convert on their second power play of the game to tie the contest up at 1-1 in the late stages of the first.

Peoria was able to get the lead back less than a minute into the second period as Mike Laidley, building off of the strong game he had on Friday night, was able to score on another short-angle shot, this time on the right-wing circle, to give the Rivermen a 2-1 lead. There were plenty of opportunities for Peoria to extend their lead, including a five-minute power play, however, they were unable to find the insurance goal.

But that insurance goal eventually came. Late in the third period, the puck was sent out into the low slot off of a hustle play by J.M. Piotrowski behind the net. Piotrowski was able to send a pass to Mitch McPherson’s backhand and McPherson calmly pulled the puck to his forehand before sending a quick shot into the top shelf with just over two minutes to play. McPherson's tenth of the season put the Rivermen up 3-1.

That goal capped off the end of a suffocating effort by the Peoria Rivermen as they held the Bobcats to just one shot on goal in both the second and third periods. Overall, Vermilion mustered just 10 shots on net all game while Peoria sent 44 shots on goal. The win marks the second straight win for Peoria on the weekend and fourth in their last six games. The Rivermen will look for the three-game weekend sweep as they host the Quad City Storm on Sunday afternoon at 3:15 pm.