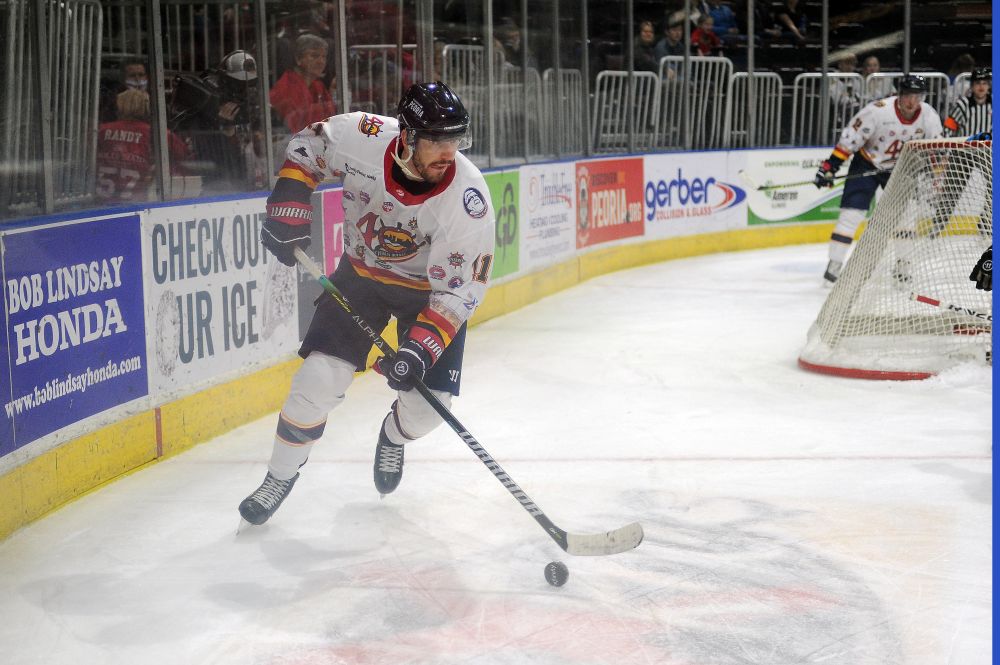 PEORIA, IL – It was announced this Wednesday that the Rivermen forward Paul-Antoine Deslauriers has accepted a call up to the Trois Rivieres Lions of the ECHL. In addition, the Peoria Rivermen have released forward Francesco Corona and have re-signed forward Justin Brausen.

Deslauriers played in 32 games for the Rivermen this season, his first in the Southern Professional Hockey League. During this span, Deslauriers netted 11 goals and 10 assists for 21 points. This includes a road hat trick he scored on New Year’s Eve against Evansville.

A native of Otterburn Park, Quebec, Deslauriers will suit up for the Lions who are the ECHL affiliate of the Montreal Canadiens. This is his first call up to the ECHL ranks.

Corona, a native of Barrie, Ontario, played in 19 games for the Rivermen this year and found use as a small-and shifty forward that excelled in working on close areas. Corona had two, goals and 14 assists for 16 points this year, including the overtime winner on January 21 against Quad City.

Justin Brausen, a native of Little Canada, Minnesota,  played in 21 games for Peoria before being released earlier this month. He has four points (one goal, four assists) so far this year with his first goal coming in Danville against the Vermilion County Bobcats, the successor team to the Danville Dashers. Brausen spent seven years (2013-20) with Danville while in the Federal Hockey League.

The Rivermen are on the road once more this Friday night in Vermilion County Before returning to Carver Arena on February 19 and 20. This Saturday will be Baby Shark Night presented by the Gift Of Hope, the first 500 fans aged 12 and under will receive a free stocking hat courtesy of Klein Design and the Rivermen will be wearing specialty Baby Shark uniforms. On Sunday, Peoria will be hosting another Sunday Family Funday against Quad City. Festivities include a pre-game kids fest and post-game skate with the team.