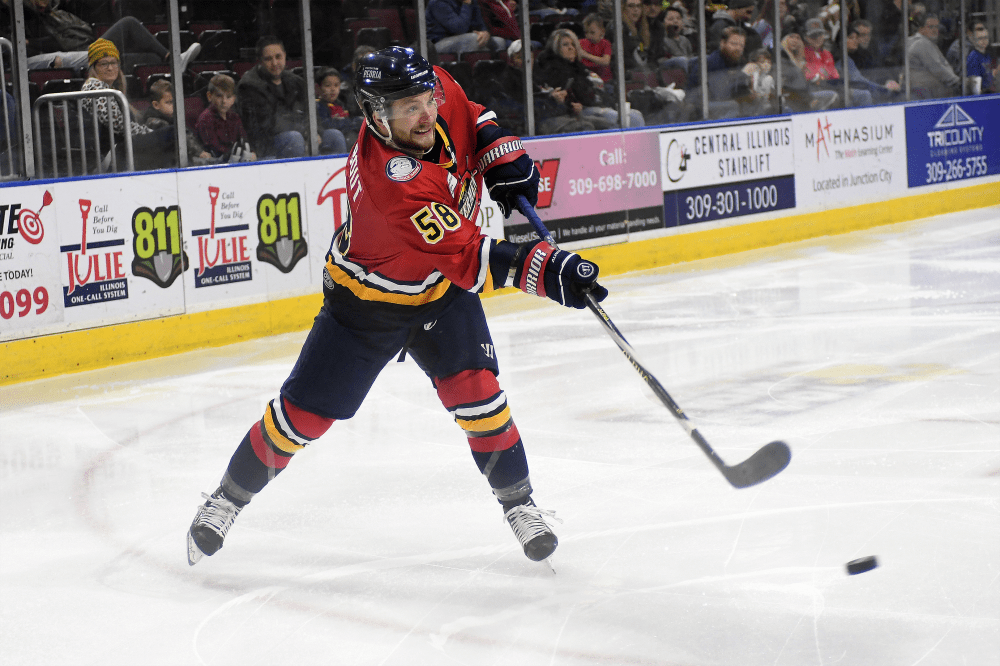 KNOXVILLE, TN – Marcel Godbout’s three goals in the third period was the difference on Thursday night as the Rivermen defeated the Knoxville Ice Bears 3-2 at the Knoxville Civic Coliseum.

The first period was a fairly even affair as both sides leveled six shots on the net but failed to find the opening goal. Both Peoria and Knoxville had a power play in the first period, and had several strong chances off of the power play, but came up empty.

The Second period saw chance after chance for both sides. No one was able to find the back of the net until Knoxville was able to set up a one-timed shot from Razmuz Waxin-Engback that sailed over the glove of Eric Levine to make it 1-0 Knoxville.

Unlike the first two periods, sparks flew in the third. It all started off as Marcel Godbout was able to find the back of the net from a quick release following a face-off to tie the game at 1-1. Not long later, the Ice Bears were given a power play and capitalized to re-take their lead 2-1. But then fate turned and the Rivermen were given a power play of their own, soon augmented by a delay-of-game call against Knoxville.

With a golden opportunity, to not only tie the game but take the lead looking them in the face, the number one power-play unit in the SPHL took advantage. Two more goals by Godbout, the first on the five-on-three advantage and the second on the five-on-four power play erased the deficit and put the Rivermen up 3-2. All three of Godbout’s goals came in just over eight minutes of game time and was enough to propel the Rivermen past the Ice Bears for their 24th victory of the year.

The Rivermen will hit the road again to face off against the first place Havoc in Huntsville, Alabama on Friday and Saturday night.