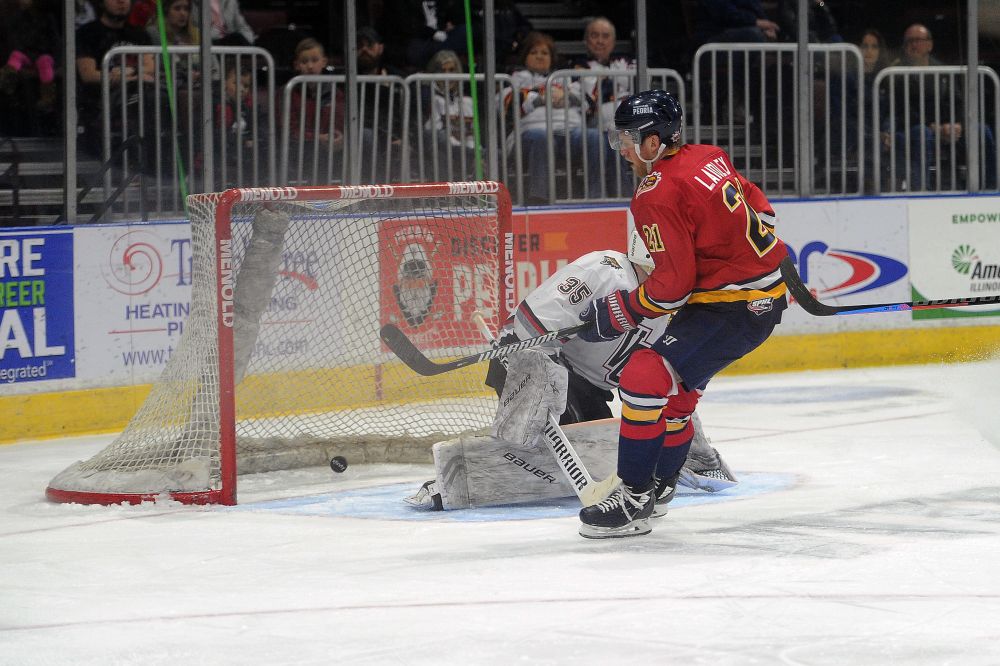 PEORIA, IL – The Rivermen returned a familiar face and picked up a familiar result against the Vermilion County Bobcats as Peoria skated to a 5-0 victory at Carver Arena on Sunday night.

The first period was dominated by Peoria as they were able to out-shoot the Bobcats 19-7. After nearly 18 minutes of offensive dominance, the Rivermen were able to breakthrough. Mitch McPherson drove the net from the right side. As he tried his shot the puck deflected up in the air and over to the far side of the net. Alec Baer was able to glove the puck down and play it to his stick where he fired it into the back of the net for his 18th goal of the season to give the Rivermen the 1-0 lead.

Peoria ratcheted up the scoring in the second period as Mike Gurtler picked up his first goal in his first game back for the Rivermen off of a nice feed in front. Gurtler, who returned to the Rivermen after a brief retirement, went down to one knee to one-time the shot into the top shelf and give Peoria a 1-0 lead. But the Rivermen didn’t end there. Paul-Antione Deslauriers received a pass from Marcel Godbout at the right half-boards and was able to one-hand the puck into the back of the net. Austin Wisely also buried a one-timed shot from the high slot to record his second-ever professional goal and extended the lead to 4-0.

The Rivermen were able to add one more goal in the third period as Mike Laidley streaked up the ice on a short-handed breakaway and fired a shot in five-hole on Vermilion netminder Chase Perry to extend the lead to 5-0. Throughout the night, Rivermen netminder Eric Levine stood tall, making 21 saves to record his league-leading fourth shutout of the season.

Peoria will be back in action this Thursday night as they host the Roanoke Rail Yard Dawgs for a Thursday-Friday-Sunday series at Carver Arena.