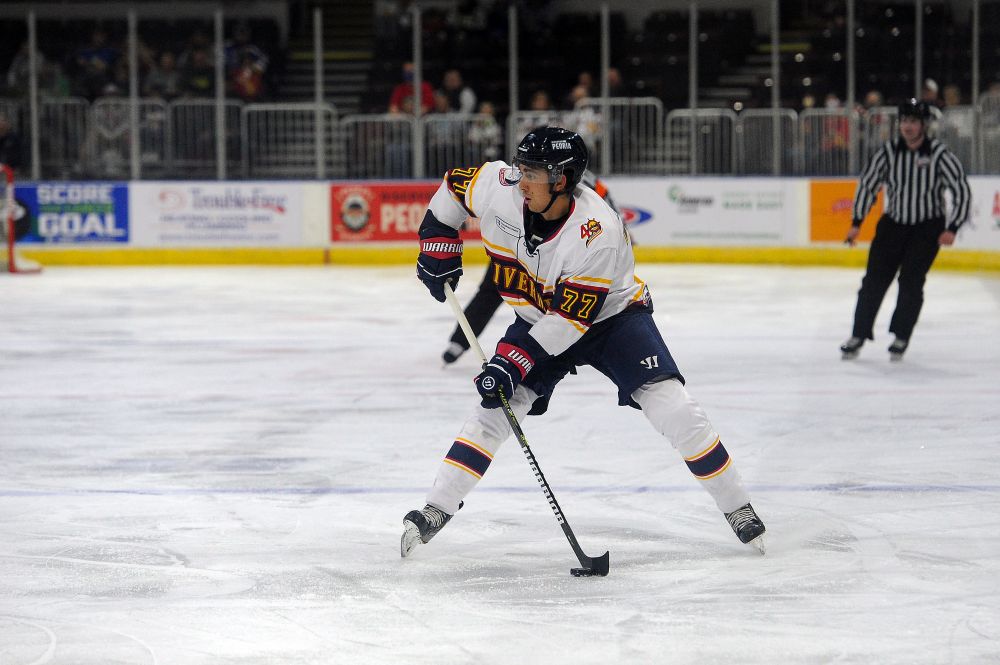 DANVILLE, IL – Powered by two goals by Mathieu Cloutier, the Rivermen extended their winning streak to nine games in a row as they defeated the Vermilion County Bobcats by a score of 5-1 at David S. Palmer Arena on Friday night.

The Rivermen were able to get the first goal of the game off of a one-timed shot by Chris Allemon from the high-slot area. Allemon’s third goal of the season put the Rivermen up 1-0 through the first 20 minutes of play.

The second period saw the Rivermen net three more goals to take control of the contest. The first came from Mathieu Cloutier from behind the goal line. As he saw goaltender Chase Perry overplay a deflected shot, Cloutier shot the puck in off of Perry’s back to record his fifth of the season. Just over two minutes later the Rivermen struck again as Mike Laidley one-timed a shot from the high slot and into the back of the net to extend the Peoria lead to 3-0. Then, on their second power play of the game, Alec Hagaman received a cross-crease pass from Marcel Godbout. As he one-timed the puck in, he broke his stick but he got enough momentum on the shot for the puck to sail into a wide-open net. Hagaman’s league-leading ninth power-play goal of the year gave the Rivermen a 4-0 lead entering the final period.

The third period was a bit more of an even affair between the two sides. Vermilion County was able to get a goal back on a breakaway but Cloutier was able to respond in the mid-stages of the third. His hard wrist-shot from the right face-off dot at the 11:31 mark in the third period sailed over Perry’s glove and into the back of the net for his second goal of the night.

In the end, the Rivermen were once again able to walk away from Danville with a convincing win, their seventh straight against Vermilion County. The Rivermen have now won their last nine games in a row with four straight wins coming on the road. Peoria will look to continue their winning streak against the Quad City Storm on Saturday night as they travel to the TaxSlayer Center for their fifth consecutive road contest.