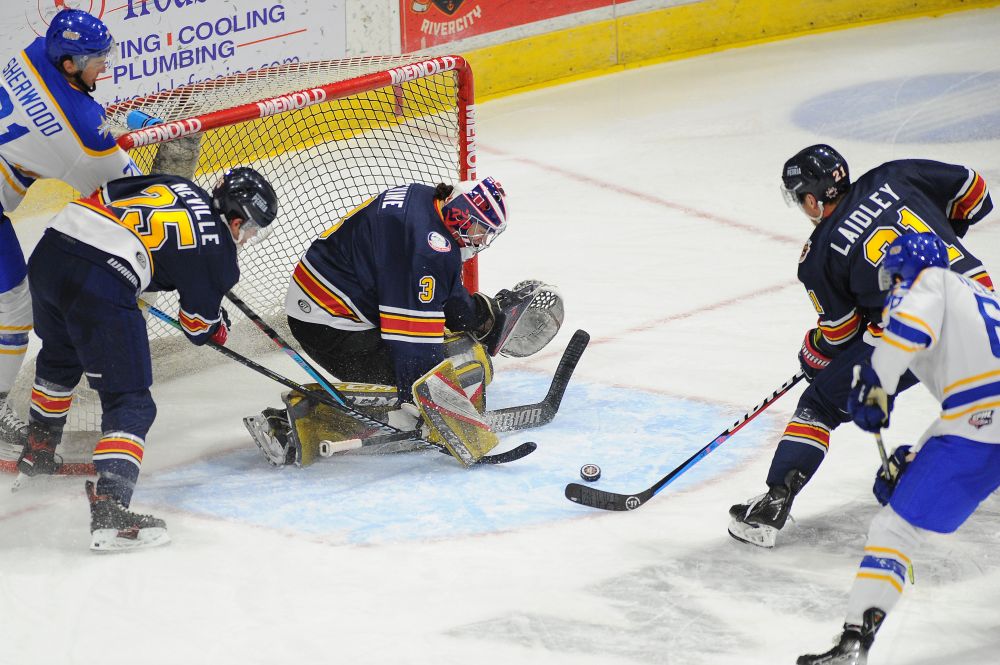 PEORIA, IL – On Blackhawks night, the Rivermen, donning red white and black, faced off against the blue, gold and white of the Roanoke Rail Yard Dawgs. Names and numbers aside, you could be forgiven for thinking you were watching an old rerun of the famed, and bloody battles between the Chicago Blackhawks and St. Louis Blues from the 1990’s. Both teams combined for 160 penalty minutes as the Rivermen rolled over Roanoke 4-0 to take over first place in the SPHL standings.

Peoria got off to a hot start in the first period with two goals by Mitch McPherson. Both goals came off of deflections in front of the net to put the Rivermen on top 2-0. Mike Laidley added on one more to extend the Peoria lead to 3-0 after the first period of play.

The second period was when things started to get interesting as the Rivermen and Rail Yard Dawgs exchanged big hits and engaged in several fights as tensions and emotions started to boil over. In all there were 56 total m=penalty minutes in the second period. The Rivermen were able to extend their lead with a power-play goal by Alec Baer. Baer saw a shot from Zach Wilkie initially saved but batted up in the air. Waiting for the puck to drop below the cross-bar, Baer batted the puck out of mid-air and into the back of the net to put Peoria on top 4-0.

The win marks Eric Levine’s fifth shutout of the season as he saved all 29 shots sent his way. The victory also marks Peoria’s ascension into first place in the SPHL standings with just over a month remaining in the regular season. Peoria will host the Rail Yard Dawgs again for the final game of the weekend series on Sunday afternoon at 3:15 pm.