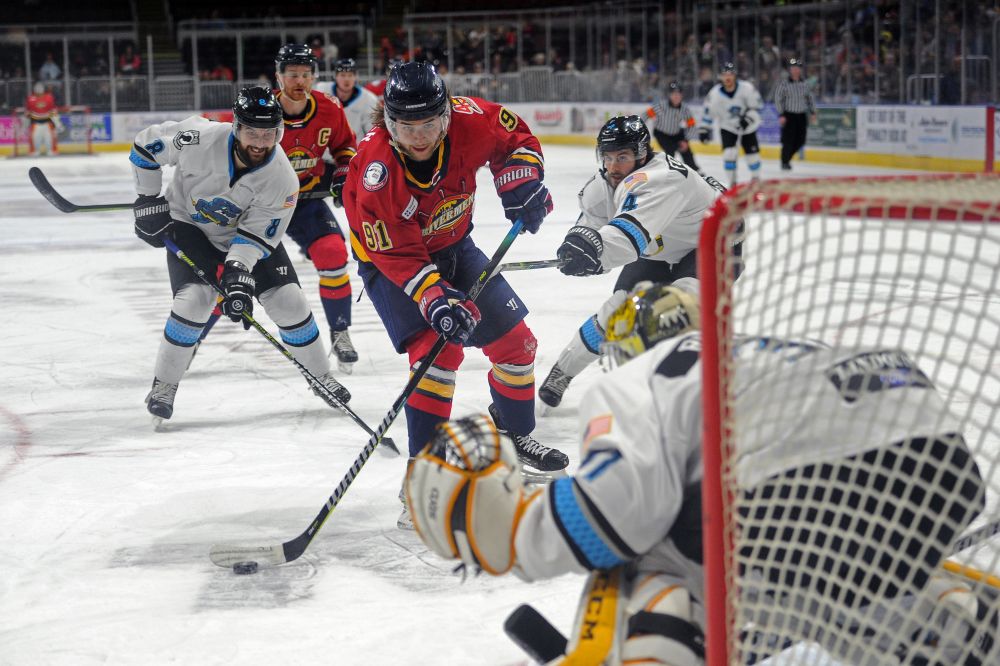 PEORIA, IL –  Sunday marked the seventh time that SPHL leading scorer Alec Baer had multiple goals in a game. But it was the first in which he scored three. Baer’s hat trick was the centerpiece of a 9-4 Rivermen rout of the Quad City Storm at Carver on Sunday afternoon.

The first period saw a flurry of goals as the Rivermen drew first blood on a great give-and-go play by Ryan Patrick who was able to deke the goaltender Kevin Resup and score his second goal of the season. But the Storm were able to answer back with two quick goals, one on the power play and the other off of a turnover to take a 2-1 lead. But the Rivermen rallied and turned to Baer to lead them. Alec Baer scored two unanswered goals, the first on a patient play as he out-waited Resup as he skated to the right side in the low slot. Baer’s second goal was on a tap-in from Marcel Godbout to give Peoria the lead back 3-2 after the first period.

Peoria continued the offensive explosion in the second period as Baer was able to fire home his third goal of the game to extend the Rivermen lead to 4-2. Baer’s first hat-trick of the season opened the floodgates for Peoria in the second period. This was followed up on the next shift by Ben Assad’s first goal on a slap-shot from the high slot that was wired into the top shelf and Alec Hagaman’s power-play goal from in tight to put the Rivermen up 6-2 after 40 minutes.

The third period saw Dale Deon light the lamp from the base of the right-wing circle to extend the Rivermen lead to 7-2. Though Quad City answered with two goals to trim the lead to 7-4, Peoria was able to seal the game with back-to-back empty-net goals by J.M. Piotrowski and Mike Gurtler to secure the 9-4 victory over Quad City.

The win on Sunday secured the I-74 Trophy for the Rivermen and marked their third straight victory since their losses to Knoxville and Huntsville. Peoria will continue their final stretch to the playoffs as they get set to host Vermilion County and Quad City next Saturday and Sunday on April 2 and 3.