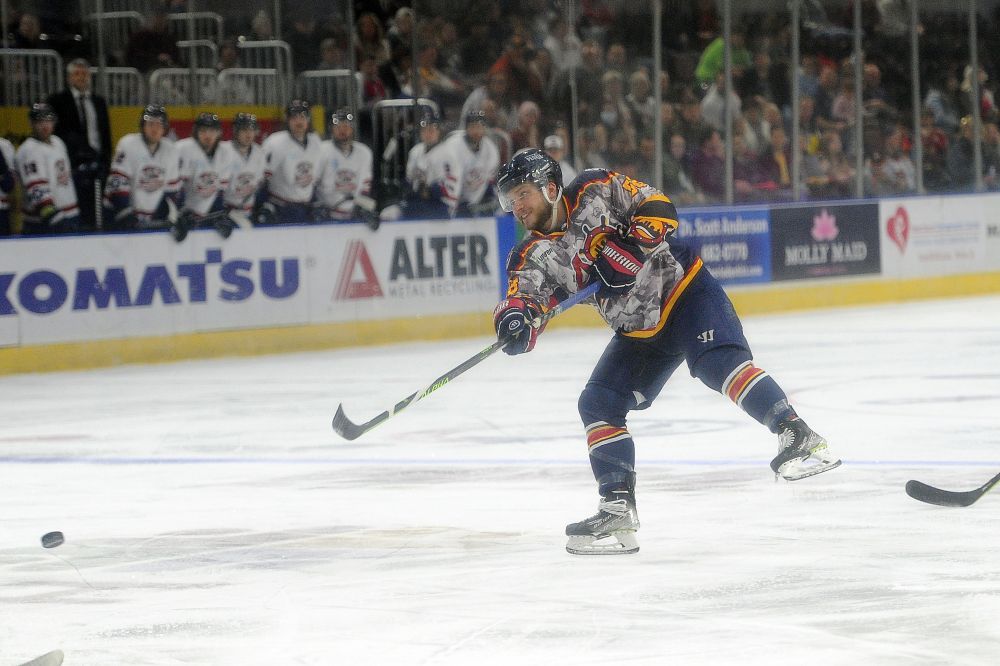 PEORIA, IL –  It was nothing he hasn’t done before, in fact, he has done it twice already, but any time a player nets a hat trick in the game of hockey it is special. It’s even more special when the feat is a big part of a turnaround victory at home. Marcel Godbout’s three goals were just that as they helped lift the Rivermen over the Evansville Thunderbolts 5-2 at Carver Arena on Friday night.

The Rivermen were able to strike first off of a power-play tally by Marcel Godbout in the first ten minutes. Godbout was able to wrist a hard shot into the back of the net to put Peoria up 1-0. But Evansville answered back on an odd-man rush to tie the game up at a score of 1-1.

The second period saw the Rivermen score two quick goals to extend their lead to 3-1. While on the power play Alec Hagaman was able to fire a quick shot from the base of the left-wing circle and into the back of the net to give Peoria their second lead of the game. This was followed up by Dale Deon’s tally after a no-look pass by Godbout found Deon in stride as he skated into the high slot. Deon's quick wrist-shot found the back of the net and put Peoria up 3-1.

However, Evansville was able to respond with their first power-play goal of the night to pull within one at the end of the second period.

But in the third, the Rivermen buckled down defensively and capped the game with a pair of power-play goals, both off of Godbout’s stick. Godbout’s second goal of the night was on a hard shot from the right-wing circle that deflected off the cross-bar and into the back of the net. His third was on an empty netter in the closing seconds of the game. Godbout’s hat-trick marked his 28th, 29th and 30th goals of the season and his third hat trick of the year to take sole control of the rookie scoring race.

The Rivermen will be back on the road on their last trip to the TaxSlayer Center this season as they take on their longtime rivals the Quad City Storm. Face-off is set for 7:10 pm.