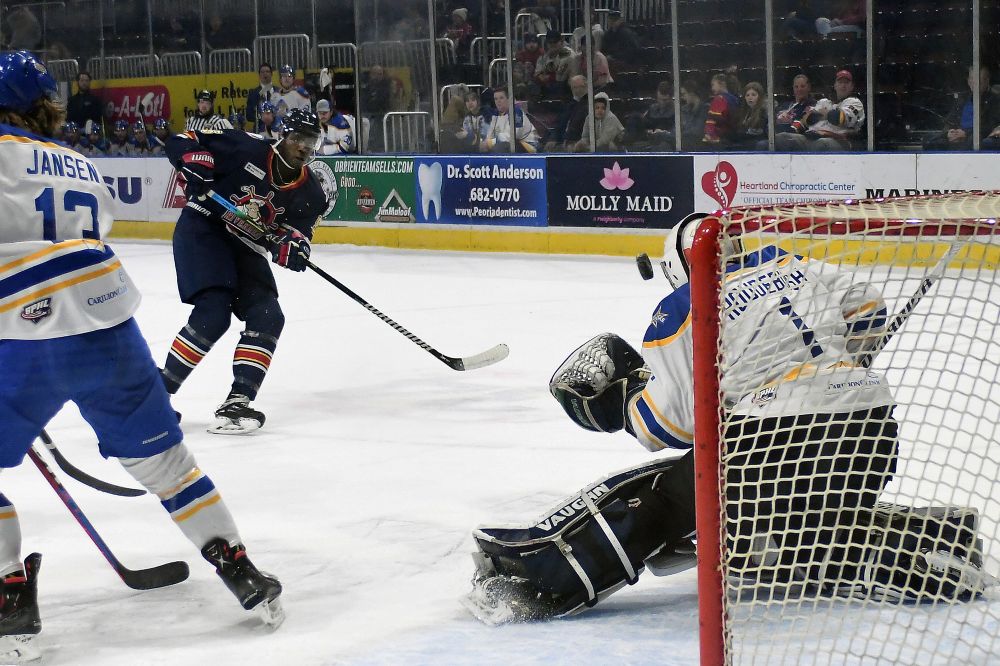 PEORIA, IL – Defenseman Lord-Anthony Grissom had never played professional hockey before, but you wouldn’t know it as he played like a veteran defenseman, closing gaps, making hits, and even scoring goals. Grissom’s two goals, including the eventual game-winner, were the difference on Thursday night as the Rivermen defeated the Roanoke Rail Yard Dawgs 6-3 at Carver Arena.

Roanoke was able to score first on a tap in play, but the Rivermen were able to answer back with four-unanswered goals in the first period. The first came off the stick of the Detroit native Grissom as he received a pass in the high slot on a three-on-two rush. Grissom fired the puck into the back of the net to record his first professional goal to tie the game 1-1. The Rivermen followed that up with a goal by Mitch McPherson on a two-on-one rush and  Austin Wisely on a net-mouth scramble. Grissom was able to add another goal from a bullet shot from the high slot as he was able to pick his spot and fire a wrist-shot glove-side to record his second of the game and the year to put Peoria up 4-1.

Like the first period, the second period started well for Roanoke, as they were able to score two unanswered to trim the Rivermen lead to 4-3. But Alec Baer, skating up the ice on a short-handed situation, skated to his left and shot the puck on net as the Rivermen returned to even strength. Goaltender Austyn Roudebush got a piece of his glove on the shot but not enough as the puck bounced into the back of the net to give Peoria a bit of breathing room and a 5-3 lead.

That proved mostly to be the extent of the game as Marcel Godbout picked up an empty-net goal in the late stages of the third to cap a 6-3 Rivermen triumph. The win put Peoria in second place in the SPHL, just one point behind the league-leading Knoxville Ice Bears. The Rivermen will face Roanoke again at Carver Arena on Friday night, starting at 7:15 pm, for the second of their three-game weekend series.