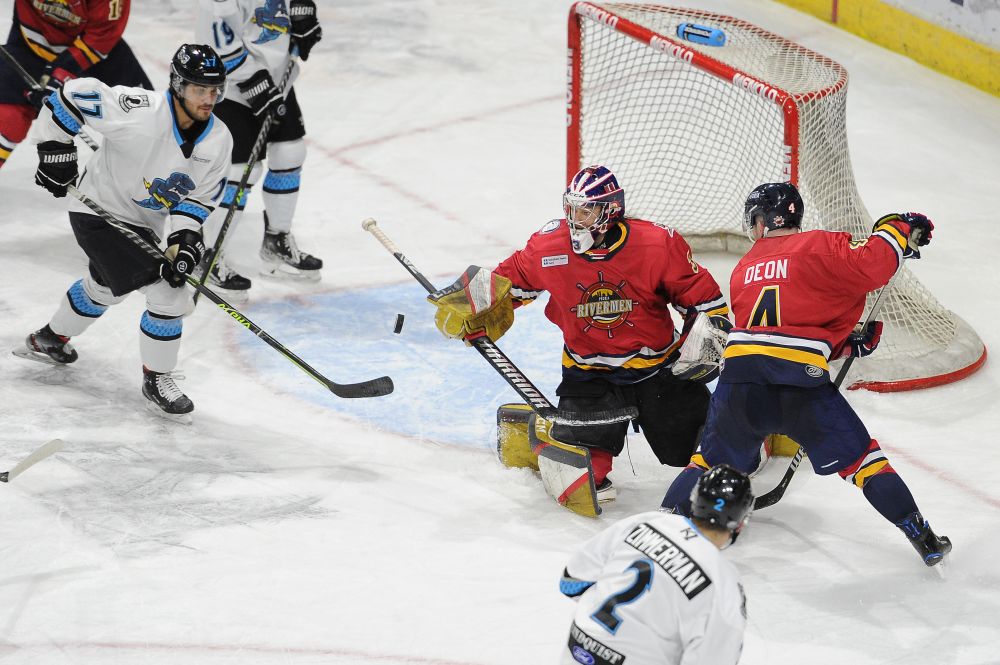 MOLINE, IL – Eric Levine made 28 saves and Alec Baer was the overtime hero as the Rivermen were able to earn a 3-2 overtime victory over the Quad City Storm on Saturday night at the TaxSlayer Center.

Quad City was able to capitalize on their first power play of the game on a quick shot from the high slot. Eric Levine was screened on the play and the Storm took a 1-0 lead. Peoria answered however just over five minutes later. A point-shot by Brandon McMartin, on the left side, produced a rebound after it was saved and Alec Hagaman was in the right spot to deposit the rebound to tie the game 1-1.

A back and forth second period finally broke open in Peoria’s favor in the mid-stages as Mike Gurtler led a two-on-rush up the ice. Skating on the left-wing side, Gurtler drifted towards the middle of the ice and fired a quick snap-shot into the top right corner to tally his second goal of the year. Gurtler’s goal gave Peoria their first lead of the night and allowed the Rivermen to take a one-goal lead into the third period for the second consecutive game.

The third period saw the Storm surge as they desperately tried to tie the game. Eventually, they did with just over seven minutes to play in regulation off of a deflected shot. But still, Levine stood tall, turning away or gobbling up any further chances Quad City had to take the lead. By the time the final horn had sounded, Levine had made 28 saves on 30 shots.

In overtime, all it took was 30 seconds. Alec Baer was able to strip the puck at his own blue line and streaked in on a break-away from center ice. Baer shot the puck quickly after a quick head-fake and his aim was true. Baer’s overtime winner came on the only shot in post-regulation play.

The win marks Peoria’s second straight and an important bounce-back victory for Levine who recorded his 100th professional victory. The Rivermen will now head back to Peoria and look for the three-game weekend sweep on Sunday afternoon against the Storm, face-off is set for 3:15 pm.