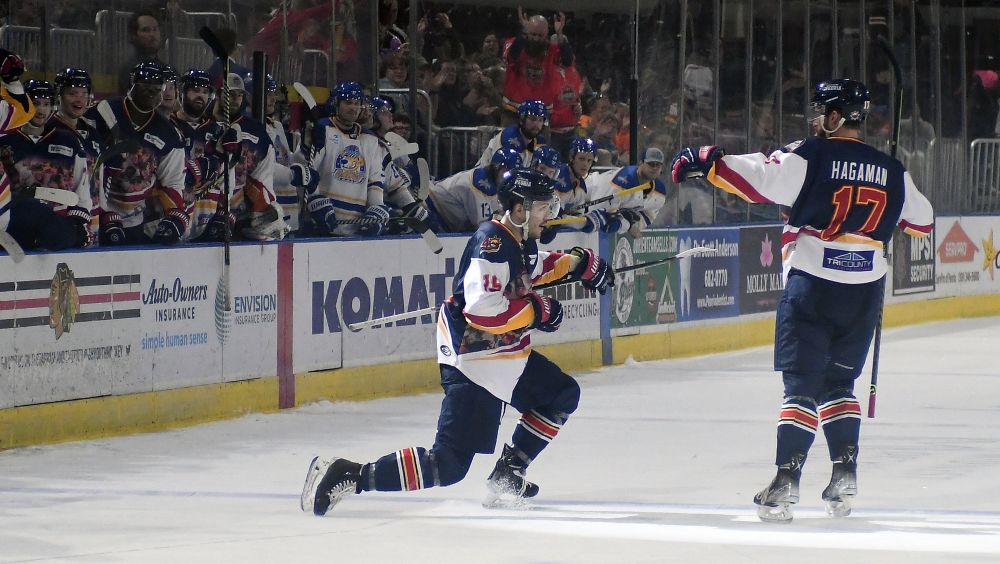 PEORIA, IL – The Peoria Rivermen entered their third game in four days against the Roanoke Rail Yard Dawgs on Sunday afternoon. Veteran goaltender Eric Levine notched his league-leading fifth shutout in Friday’s contest as the Rivermen defeated the Rail Yard Dawgs by a score of 8-0 at Carver Arena on Sunday.

Roanoke wouldn’t go down quietly, however, as Jordan Fogarty notched his first goal of the season to make it 3-1 Peoria. Peoria wasn’t done as McPherson notched a shorthanded goal, followed by a power-play goal late in the first period, to make it 5-1 Peoria at the end of the first period.

The third period was penalty-filled as 106 penalty minutes were dished out during the final frame. A total of 7 ejections for both sides throughout the period. The Rivermen added a late goal as Larry Jungwirth scored his first professional goal in the dying seconds of the game which made it 8-2 Rivermen.

A hat trick for Marcel Godbout, Larry Jungwirth scoring his 1st professional goal, and a new SPHL season penalty minute record, are the only ways to summarize this game. The Rivermen finished 3 for 7 on the power play, while Roanoke finished 1 for 8. The Rivermen’s next contest is this upcoming Wednesday as they take on the Vermilion County Bobcats at David S. Palmer Arena at 7:00 pm.