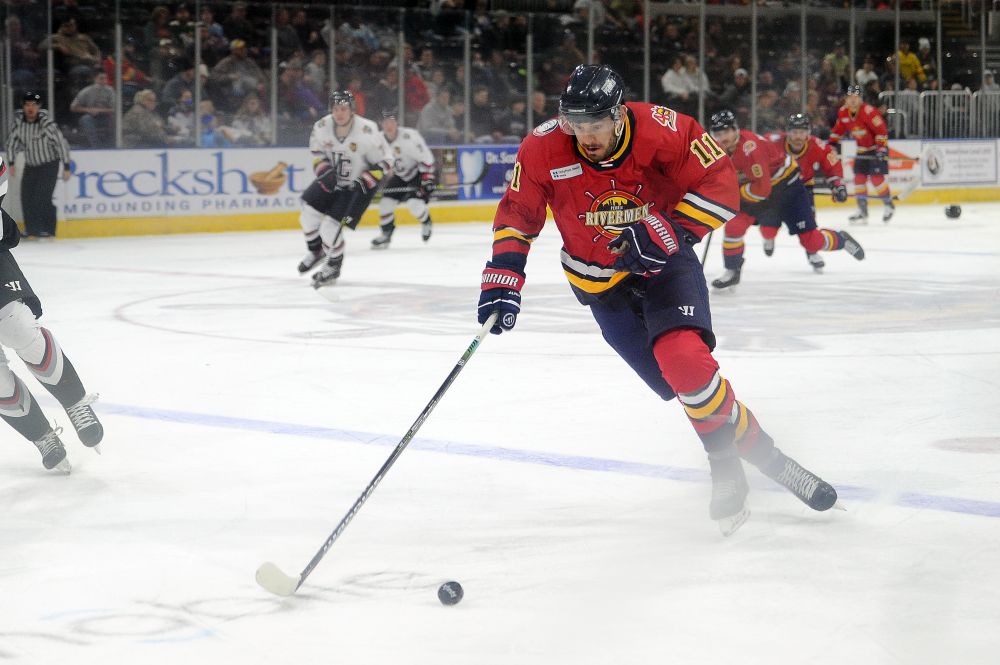 DANVILLE, IL – There are times that the final score does not accurately depict the course of a game. Wednesday was not one of those times. The Rivermen dominated the Bobcats on Wednesday night, almost from start to finish, as Peoria defeated Vermilion County 9-2 at David S. Palmer Arena.

The first period started off on the right foot for Peoria as they were able to strike first. Brandon Rumble skated into the zone on the left-wing side and sent a quick pass into the low slot. Ryan Patrick was right there to deflect the puck into the top-shelf to record his first goal of the season. Patrick’s goal put the Rivermen up 1-0 and it was a lead they carried into the first intermission.

The second period saw an explosion of scoring and it all started midway through the frame. Dale Deon was able to pick up the puck from the right half-boards and skated to the top of the slot. Skating right and shooting left, Deon sent the puck into the back of the net on a quick wrist-shot to extend Peoria’s lead to 2-0. This was then followed up just over a minute later as Alec Baer capitalized on a net-mouth scramble. Again, the Rivermen surged forward, not content with their 3-0 lead. JM Piotrowski sent a shot on net from the goal line that found its way in to extend the lead to 4-0. Though the Bobcats were able to get one back off a rebound, the Rivermen confidently took a 4-1 lead into the third period.

Things then got interesting in the third period. The Rivermen scored two quick goals thanks to Austin Wisely and Marcel Godbout. This was then followed up by a net mouth scramble goal by Vermilion County to make it 6-2 Peoria. Then, two more goals were scored by the Rivermen from Baer and Larry Jungwirth. The former marked his second goal of the game, the latter his second goal in as many nights. A sudden altercation in the Bobcats zone saw the Rivermen get an extended power play that they took advantage of. Cayden Cahill received a perfect pass cross-ice from Jungwirth and made no mistake, firing the puck into the back of the wide-open net for his first goal in professional hockey.

With the win, the Rivermen have now won five games in a row and have scored eight goals or more in their last two. In the last four games, the Rivermen have out-scored their opponents 23-7. Peoria will be off this weekend before heading down south to Knoxville and Huntsville on March 17-19 in the final push before the start of the post-season.