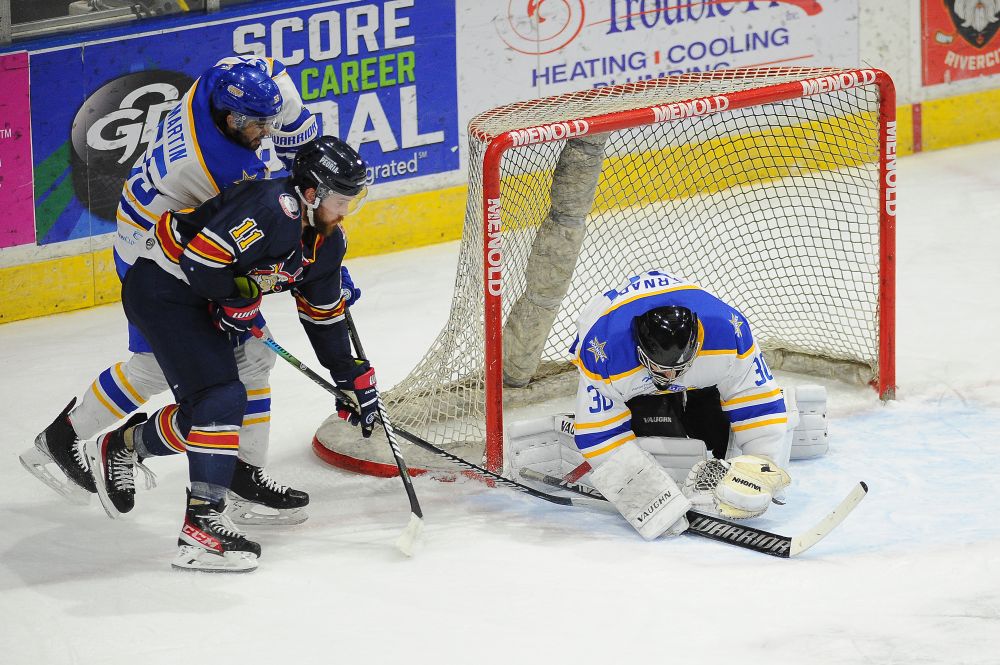 PEORIA, IL –  Peoria needed a stronger effort than on Thursday, they got that and then some on Friday. Jordan Ernst led the charge with three goals as Peoria dominated the Roanoke Rail Yard Dawgs 7-3 in game two of the President’s Cup Finals at Carver Arena.

Peoria unloaded an offensive blitzkrieg in the first period and it all started with Marcel Godbout. Godbout won a board battle along the right-wing side and fired a shot toward the net. Jordan Ernst was right in front to deflect the puck in to give Peoria the 1-0 lead early. Peoria’s second goal was also a result of a Godbout won board battle as Godbout slipped past a check and turned a shot that missed the net. But the puck deflected off the end-wall right to Alec Baer who fired the puck home to put Peoria up 2-0. Kasey Kulczycki put the Rivermen up 3-0 off a rebound in front which prompted a goaltender change as Roanoke netminder Sammy Bernard was taken off in favor of Austyn Roudebush. The Rail Yard Dawgs were able to get on the board thanks to a power-play goal but the Rivermen were able to answer back with a power-play goal of their own from a quick shot by Ernst from the left-wing circle. It would prove to be a theme for the remainder of the night. Peoria added on to their lead on a two-on-one rush up the ice as Baer showed great patience to draw the defender to him before dishing a pass to Godbout who deposited the puck into the back of the net to put the Rivermen up 5-1 after the first period.

The Rivermen took that momentum into the second period as they were rewarded with several early power plays. Though they didn’t score on them, they moved the puck well and that opened the door for Alec Hagaman’s second goal of the playoffs from a quick shot from the right-wing boards to put Peoria up 6-1. It tied an SPHL record for most goals in a playoff game. The Dawgs were able to respond with their second power-play goal of the game off a rebound but Peoria responded with a successful penalty kill in the final minutes of the middle period to deny Roanoke momentum going into the third.

A back and forth third period saw the Dawgs eventually score their first even-straight goal of the game in the last five minutes. But the Rivermen awarded a power play late, answered back once again, and once again it was Jordan Ernst. Rivermen goaltender Jack Berry send a puck up quickly to Ernst who streaked in on a break-away from center ice. Ernst, with a defender all over him, deked to his backhand and elevated the puck to secure his hat trick with 50 seconds to play and sent 3200 fans at Carver Arena into a frenzy. Chants of “We want the cup” echoed down as time expired and the Rivermen took a two-games to none lead in the finals series. It marked the most goals scored by a team in the playoffs in Southern Professional Hockey League history.

Peoria will play in Roanoke for game three on Monday, May 2 with a chance to clinch their first President’s Cup and first playoff championship in 22 years. Face-off is set for 6:05 pm central.