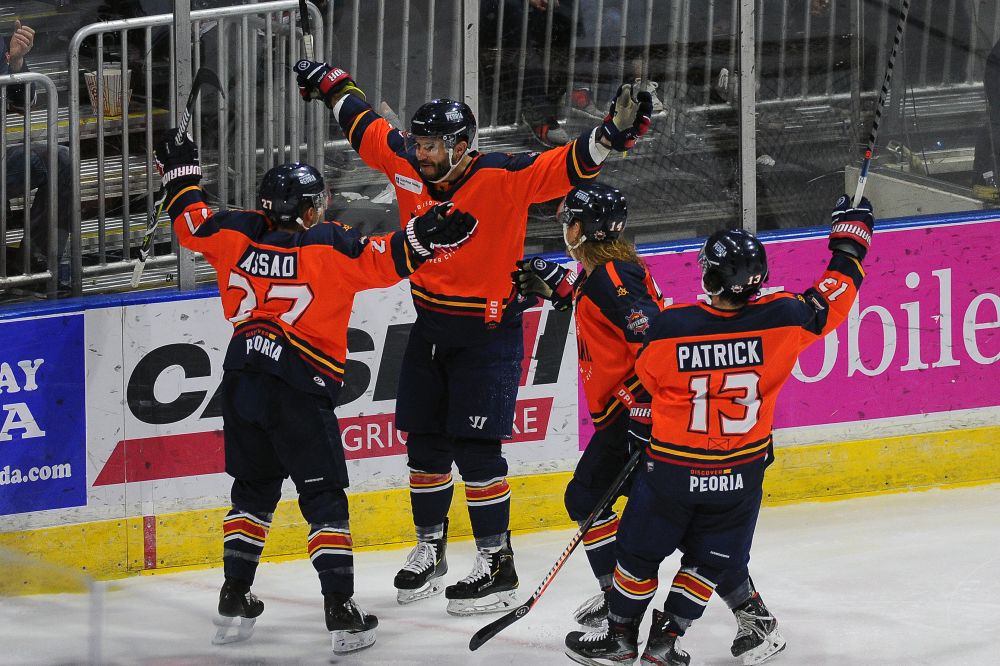 PEORIA, IL – The Peoria Rivermen completely routed the Vermilion County Bobcats on Saturday night at Carver Arena. On his birthday, Mike Gurtler led the way with two goals as Peoria defeated the Bobcats 10-3 in one of the most lopsided victories of the year.

Peoria was able to get on the board first while on the power play as Alec Baer’s shot from the left circle was initially saved but produced a rebound that JM Piotrowski was quick to capitalize on. Piotrowski’s 19th goal of the year put the Rivermen up 1-0. This was followed up by Mike Gurtler’s fourth of the season as he deflected a rebound off of his skate while on an odd-man-rush up the ice. Up 2-0, the Rivermen dominated the first period, out-shooting the Bobcats 22-2.

The second period saw the Bobcats push back, but the Rivermen continued their offensive flair as Chris Allemon, in his first game back from the injured reserve, was able to fire the puck into the back of the net off a brilliant passing play. This was followed up again by Kasey Kulczycki’s first goal as a Rivermen as he capitalized off a net-mouth scramble to put the Rivermen up 4-0. It marked the ninth straight home game that Peoria was able to score four goals or more.

Though Vermilion was able to get on the board in the last minute off of a deflection in front, the Rivermen still held control of the contest, up 4-1 after two periods.

But the scoring wasn’t done there. The Rivermen exploded for six goals in the third period with two coming off the stick of Alec Hagaman and Marcel Godbout respectively and a second goal coming off of the stick of Mike Gurtler just 90 seconds into the final period. Ben Assad capped off the scoring with Peoria’s tenth goal of the night as Vermilion County was only able to muster two goals in response.

The 10-3 victory marks the most goals the Rivermen have scored in a game this season and the second straight game at home that saw Peoria score nine goals or more. It also marked goaltender Eric Levine's 28th victory of the season, giving him the most wins by a Rivermen goaltender since Kenrick Exner in the 2000-01 season. With the win, Levine also now boasts the most wins in a single season by a Peoria netminder in the SPHL era. The Rivermen will look to sweep the weekend as they host the Quad City Storm on Sunday afternoon at 3:15 pm.