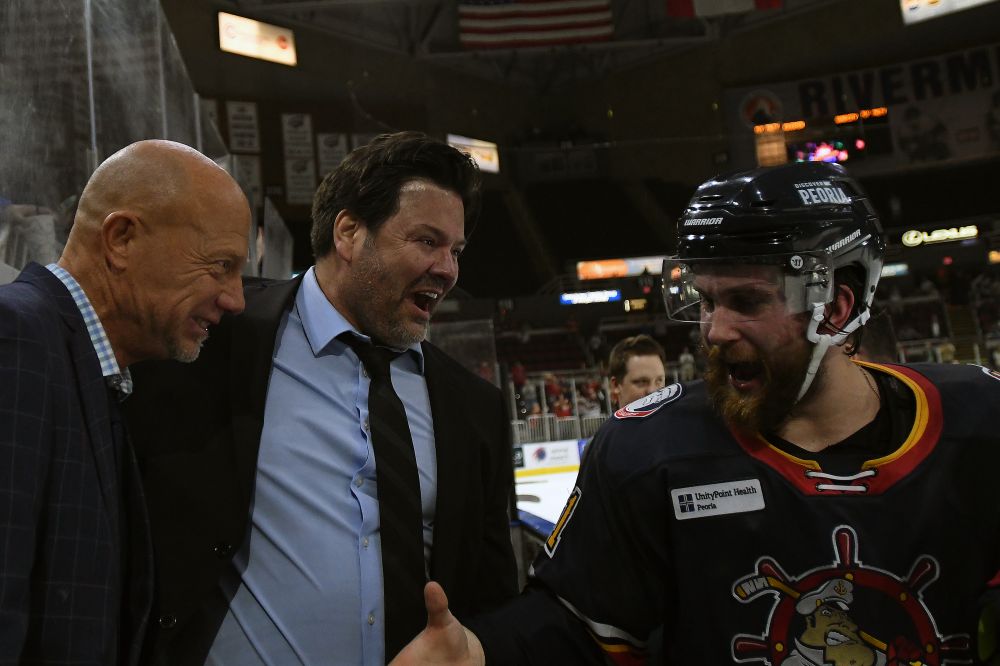 PEORIA, IL –  It was a heavyweight battle, blow and counterblow. But the Rivermen ultimately prevailed against Quad City, and in the process punched their ticket to the franchise's fourth President’s Cup Final.

Despite a slow start, Rivermen netminder Jack Berry held the line and kept the Storm off the board in the first five minutes of the game. Then Marcel Godbout, who has had the hottest stick of this series, skated up the left-wing side and cut across the top of the crease. As he lost his footing Godbout fired the puck around the pad of Bailey Brkin to put the Rivermen up 1-0. Godbout’s goal marked his fourth tally in three games.

The second period however was dominated by Quad City as they peppered Berry with all kinds of shots. They were able to find the equalizer off an awkward shot from the right-wing. Since that goal, the Storm were buzzing but the Rivermen held firm.

It all came down to that third period.

Peoria, with tired legs, soldiered on and pushed. They were able to get a goal from a short-angle back-handed shot from JM Piotrowski to go up 2-1 but the Storm answered back on a net-mouth scramble to tie the game once again 2-2. In the final six minutes of regulation, the Rivermen got a power-play opportunity. It was their first and only one of the night, and they cashed in.

A nice move by Brandon Rumble on the left side faked all of the Quad City defenders to the middle, opening up room for Jordan Ernst down low. After feeding a quick pass to Ernst, he fired the puck into the back of the net while Brkin and his defense was out of position.

Down 3-2, the Storm brought a fury of chances but the Rivermen held the line in the final few minutes to take the game and the series. Peoria, defeating the Storm, punched their ticket to the 2022 President’s Cup Final against the Roanoke Railyard Dawgs. The finals will be a five-game series with game one set to take place on home ice on Thursday, April 28 at Carver Arena.