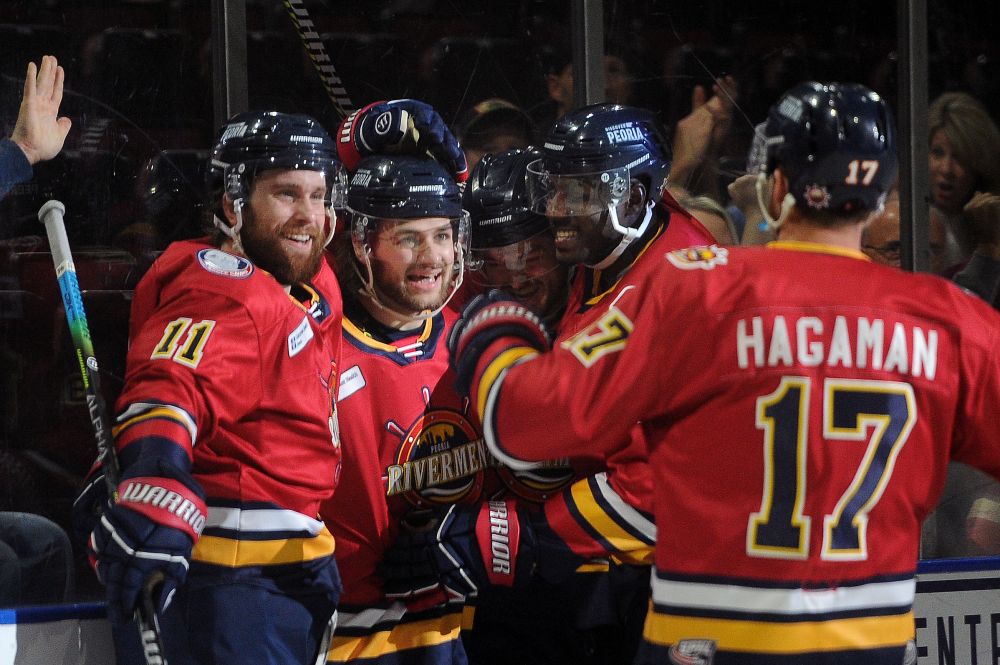 For the third straight game, Peoria jumped out to a one-goal lead early. Dale Deon skated up the right-wing side and threw on the breaks at the half-wall. Seeing no passing option, Deon sent a hard shot on the net that beat Cody Karpinski for Deon’s first of the post-season. Pensacola answered back a few minutes later with a power-play goal of their own to tie the game 1-1. But in the final five minutes of the first, while the Rivermen were on the power-play, Alec Hagaman was able to get a dirty goal off of a goal-mouth scramble to give Peoria the lead back 2-1.

Peoria faced their biggest challenge in the second period with an extended five-on-three power play for Pensacola in the early stages of the second. But thanks to great blocks and timely saves by goaltender Jack Berry, the Rivermen were able to kill it off. Peoria went on the attack for the rest of the frame and was eventually rewarded with Austin Wisely’s second goal of the playoffs off of a turnaround shot from the left-wing circle to extend Peoria’s lead to 3-1.

The third period saw the Rivermen bend but not break. They continued to play staller while on even-strength but the Ice Flyers still had success on the power play. A late power-play goal by Pensacola pulled them within one but just nine seconds later Jordan Ernst was able to find the back of the net on a quick shot to give the Rivermen an insurance goal. There was some controversy and discussion about whether or not Ernst’s shot had crossed the line but the ruling on the ice was upheld, and the Rivermen were given a 4-2 lead. But then Pensacola earned back-to-back power plays in an attempt to tie the game. Peoria’s penalty killer’s stood firm and weathered the storm, not allowing Pensacola to get set up. In the end, the Rivermen held on for a 4-2 victory and a two games to one series win.

The Rivermen will be heading to the second round where they will face either the Huntsville Havoc or the Quad City Storm, depending on the outcome of the Knoxville-Roanoke series.