Rivermen Bounce Back in Vermilion 7-1 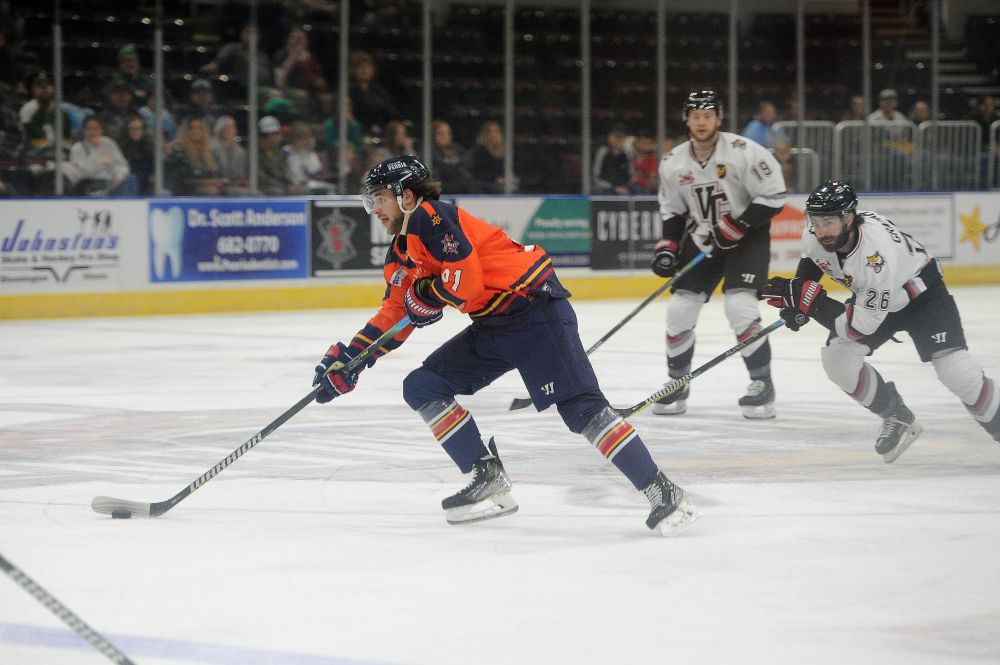 DANVILLE, IL –  In the final game of the regular season, the Rivermen were able to bounce back and gain momentum heading into the playoffs. Peoria defeated the Vermilion County Bobcats 7-1 at David S. Palmer Arena on Saturday night.

All it took was 56 seconds before Peoria stuck first. Jordan Ernst stepped in over the blue line and unloaded a heavy slap-shot from the top of the left-wing circle to put the Rivermen up 1-0. This was followed up a few minutes later by Lord-Anthony Grissom’s goal, coming on a back-door pass to extend the Rivermen lead to 2-0.

Peoria took that momentum into the second period and was able to extend their lead on the power play. A point shot by Ernst was deflected by Mike Laidley in front just enough that it hit the goaltender Mac Burglove and trickled in over the line. The goal marked Laidley’s first since returning to the lineup from injury. Just a few shifts later Ernst netted his second of the night off of a back-hand shot from the right-wing side to extend the Peoria lead further to 4-0.

The third period saw the Rivermen score two more quick goals thanks to JM Piotrowski and Alec Hagaman to put Peoria up 6-0. Though the Bobcats answered with a power-play goal of their own, the Rivermen responded with another goal by Piotrowski to put them up 7-1.

With the victory, the Rivermen finish the 2021-22 campaign in third place with a 38-11-3-4 record and 83 points. The Rivermen will face off against the Pensacola Ice Flyers in the first round of the President's Cup Playoffs. Peoria will travel to Birmingham, Alabama on Wednesday, April 13 due to a conflict with Pensacola’s home rink, for game one against the Ice Flyers. The Rivermen will then be back home at Carver Arena for game two on Friday, April 15 with game three, if necessary, on Saturday, April 16 also at Carver.