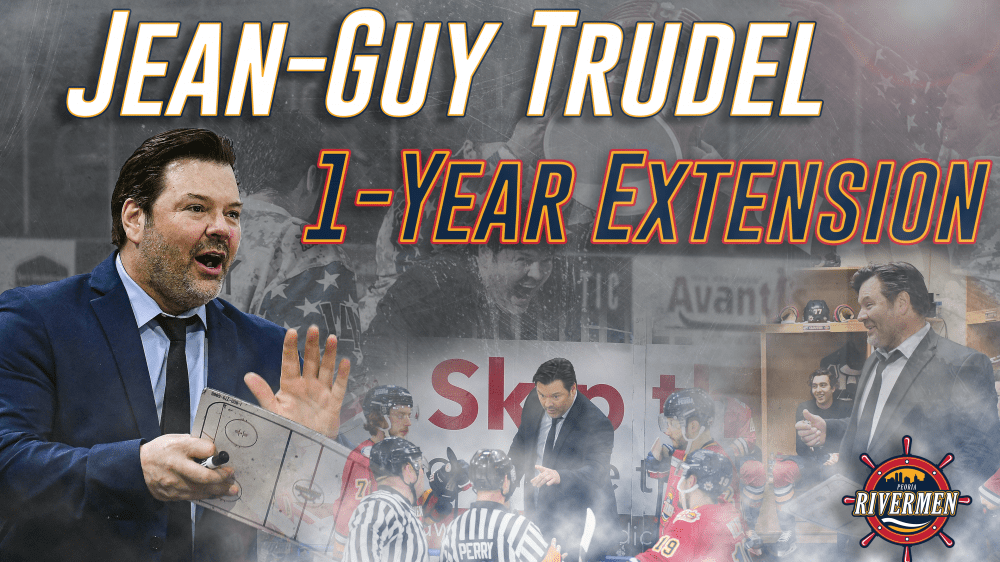 PEORIA, IL –  The Peoria Rivermen will retain the services of its winningest head coach in franchise history. Jean-Guy Trudel has agreed to a one-year contract extension to coach the Rivermen through the 2022-23 season. He will retain both titles of Head Coach and General Manager.

“I am extremely grateful for the continued trust that ownership group and [Rivermen President/COO] Bart Rogers has in me,” Trudel said. “I will continue to work extremely hard to make our city proud of the product we put on the ice nightly.”

Trudel, 46, has skillfully led the Rivermen through eight seasons in the Southern Professional Hockey League. Trudel has guided the Rivermen to four regular-season titles and three President’s Cup Finals appearances. To date, Trudel has coached in 466 games across the regular season and playoffs and boasts a 300-113-53 overall coaching record with the Rivermen. He stands as the winningest head coach in Rivermen franchise history, a record he set back in November of 2019. Individually, Trudel has been honored as SPHL Coach of the Year three times.

“I’m fortunate to work with great people, players, and staff and I will never take it for granted,” Trudel said.

“The attributes Jean-Guy brings to our franchise both on and off the ice are very hard to find these days in minor league sports and his success guiding the team year in and year out to give our great fans a winning product is unmatched,” said Rogers. “We are excited for our upcoming run in the SPHL Playoffs and look forward to another great season next year!”