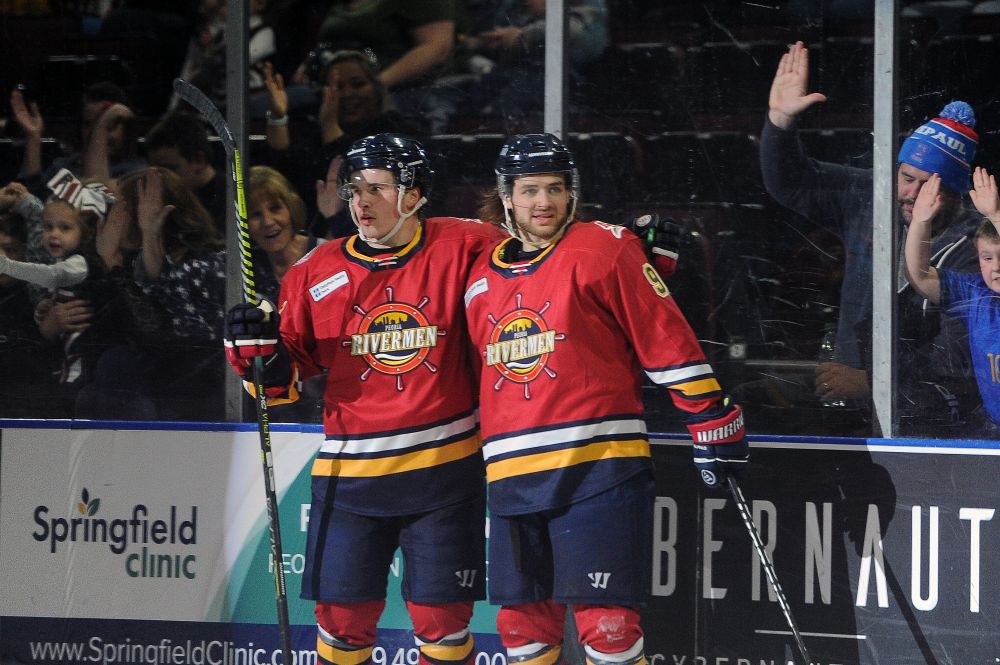 BIRMINGHAM, AL –  Denied their usual home-ice advantage due to a scheduling conflict, the Pensacola Ice Flyers looked to continue their post-season winning streak over Peoria. The Rivermen had other plans as they defeated the Ice Flyers 6-3 at the Pelham Civic Complex on Wednesday night.

Just under ten minutes into the first period, the Rivermen were able to get the all-important first goal as Austin Wisely was able to pick up the puck off a rebound and fired it into the back of the net. After this goal, the Rivermen started playing smoother, faster, and with more confidence. This paid off in the form of Peoria’s second goal. A long pass from Alec Hagaman found Alec Baer in stride on a two-on-one rush from the blue line. Baer shot for a rebound but saw the puck slide in under the pad of Ice Flyers goaltender Sean Kuhn to extend the Rivermen lead to 2-0.

The first ten minutes of the second period saw Pensacola try and fail to find the back of the net. At one point out-shooting Peoria 6-1, Eric Levine was stellar keeping the puck in front of him and allowing his defenseman to quickly clear rebounds. At the halfway point of the contest, the period turned in Peoria’s favor as a point-shot by Lord-Anthony Grissom found the back of the net from the left point. Up 3-0, Peoria went back on the attack and was rewarded by two goals from their veterans Jordan Ernst and Kasey Kulczycki, the former coming on the power play, to put Peoria up 5-0 through two periods.

Though Pensacola was able to score two quick two goals in the first three minutes of the third period, Mike Laidley put any comeback attempt on ice as he capitalized on a two-on-one rush up the ice to extend the Rivermen lead to 6-2. A last-minute goal by the Ice Flyers was too little too late as the Rivermen skated off to a 6-3 victory and a 1-0 series lead.

The win marked Peoria’s first-ever against Pensacola in the post-season. With the victory, Peoria has a chance to clinch the series on home ice on Friday night at Carver Arena. Face-off for game two is set for 7:15 pm.