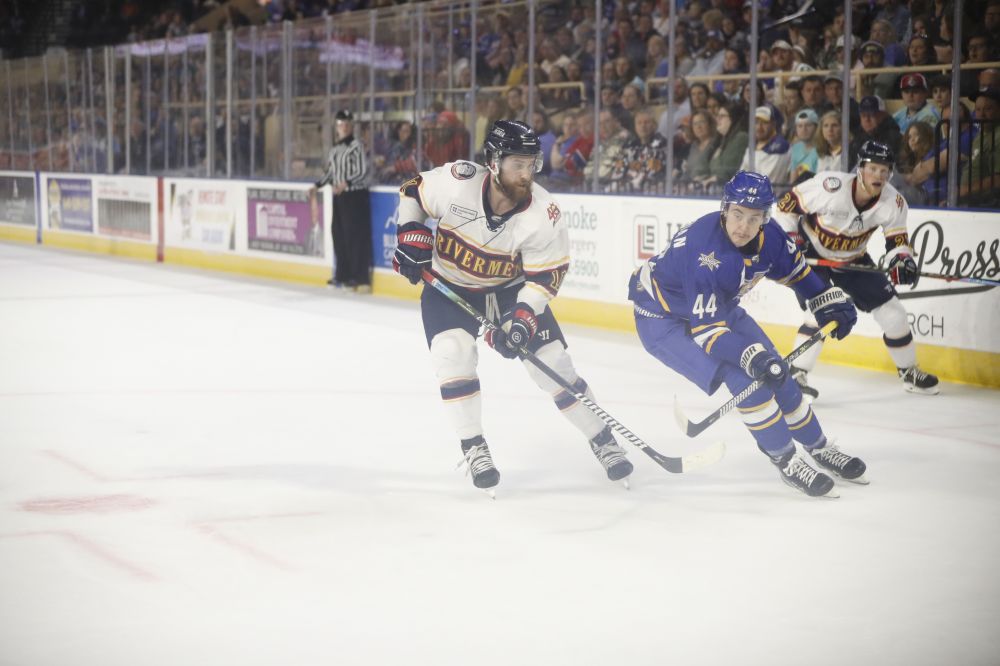 ROANOKE, VA –  What was supposed to be a coronation turned into a setback as the Rivermen fell 4-3 to the Roanoke Rail Yard Dawgs on Monday night at the Berglund Center.

The first period was a back-and-forth affair as both teams traded quality chances. Roanoke could argue that they had the greater number, but Rivermen goaltender Jack Berry made several quality saves to keep the game scoreless through the first period.

Peoria was able to take that momentum into the second period as Alec Hagaman found the back of the net to put the Rivermen up 1-0 on a short-angle shot. Roanoke countered with three unanswered off the stick of Nick Ford to put Peoria down 3-1. But the Rivermen, ever resilient battled back. It started with a goal-mouth scramble goal by Kasey Kulczycki and ended with a. one-timed shot by JM Piotrowski to tie the game with less than a minute to play in the second period.

Unfortunately for the Rivermen, they were unable to get a sustained offensive to forecheck going and it was the Rail Yard Dawgs who got the fortunate bounce on the doorstep to take a 4-3 lead. Peoria was unable to tie the game and was forced to settle for a loss in game three, making the series two games to one in Peoria’s favor.

Though the loss stings, the Rivermen will have a chance to bounce back on Tuesday, May 3 for game three of the President’s Cup Finals. Face-off is set for 7:05 pm eastern time, 6:05 central.