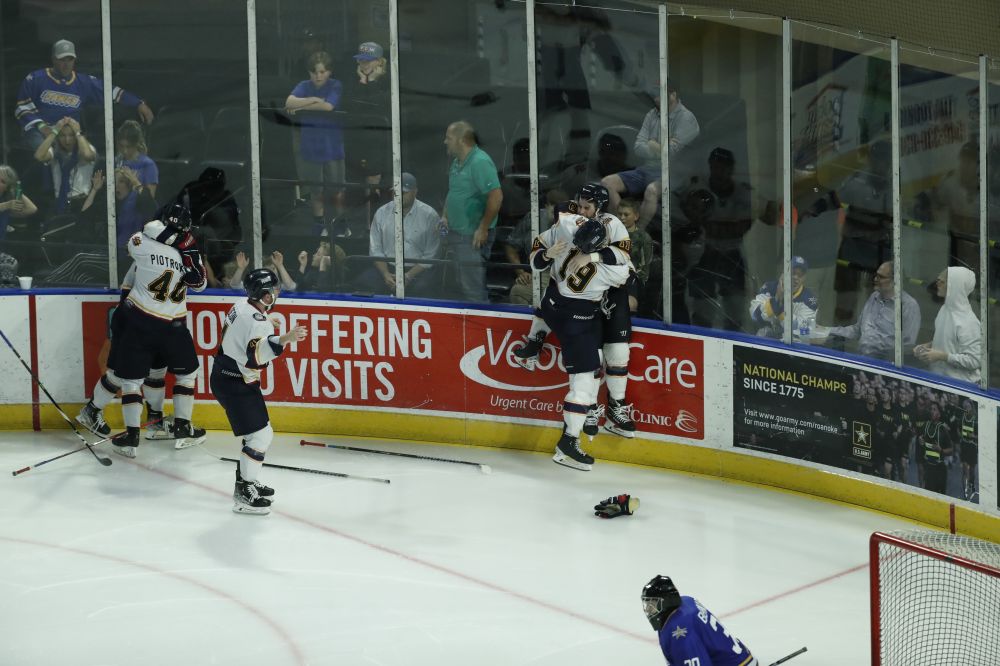 ROANOKE, VA –  It was a storybook ending. The Peoria Rivermen rallied from two goals down to defeat the Roanoke Rail Yard Dawgs 3-2 in overtime to clinch their first-ever President’s Cup on Tuesday night at the Berglund Center.

The first period went almost as wrong as it could have for Peoria, a turn-over in their own zone ended up in the back of the net as the Rail Yard Dawgs took a 1-0 lead. Since that goal, Roanoke owned the offensive zone as Peoria struggled to clear with possession and Jack Berry was forced to make several critical saves to keep the Rivermen within one.

Roanoke though was able to extend their lead off a power-play goal early in the middle frame. Peoria though answered back with a deflection in front by Mike Gurtler after a shot from the right half-boards found its way into the net. The Rivermen, with momentum, had a chance to tie on an extended five-on-three but were unable to find the back of the net.

That third period was a back-and-forth affair as the Rivermen scratched and clawed for every inch. They were able to get some room on the power play and Marcel Godbout wired a shot into the back of the net from the top of the right-wing circle to tie the game 2-2. With the game tied at the end of regulation, Peoria headed to overtime for the first time in the post-season.

In overtime, it only took a minute or so. A shot from Jordan Ernst from the left-hand boards was deflected in toward the goal by JM Piotrowski in front. The puck slid just inside the right post, the same spot Roanoke’s game three-winner in the third careened to, and just like that a 22-year post-season championship drought was over. The Rivermen flooded the ice, sticks, and gloves, and helmets flying, as the Peoria Rivermen won their first-ever President’s Cup championship.

Goaltender Jack Berry, who made 31 saves, was named playoff MVP. The Rivermen finish their historic 40th season making more history and leaving a legacy that will echo for ages. A storybook ending indeed.