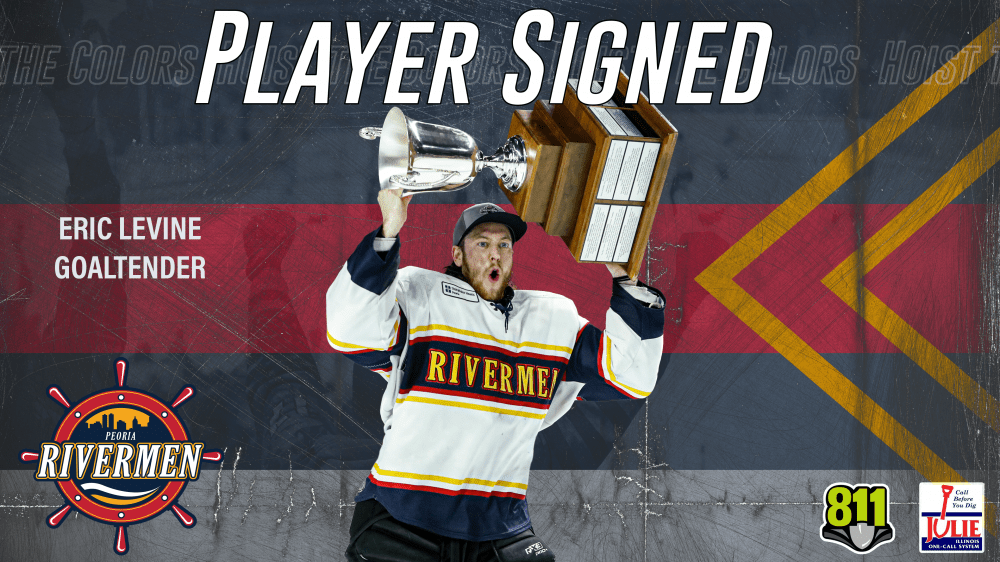 PEORIA, IL – The Peoria Rivermen announced on Monday that they have signed their second player, and first goaltender, ahead of the 2022-23 season. Eric Levine returns for his ninth professional season and sixth in a Rivermen uniform.

A native of Wheeling, Illinois, Levine set a new Rivermen single-season record in consecutive starts last season with 20. Levine also led the SPHL last season in victories (29), minutes (2446), games played (43), and shutouts (5). Levine also set new Rivermen season SPHL records for victories and minutes played while tying the record for most games played. All of those records were held by Kyle Rank since the 2013-14 season.

Levine’s 29 wins last season are his most while in a Rivermen uniform, which was achieved en route to his first President’s Cup championship in 2022. Levine, who will be 34 by the time this season starts, has clearly gotten better with age as in the past two seasons he has averaged lower than a 2.10 goals against average and has boasted a save percentage in the high .920’s.

Aside from playing in Peoria, Levine has SPHL experience with the Quad City Storm, Pensacola Ice Flyers, and the now defunct Louisiana Ice Gators. In addition, he has an extensive ECHL track record with the Fort Wayne Komets, Indy Fuel, Utah Grizzlies, Colorado Eagles, and the Newfoundland Growlers where he was part of their Kelly Cup championship run in 2019.