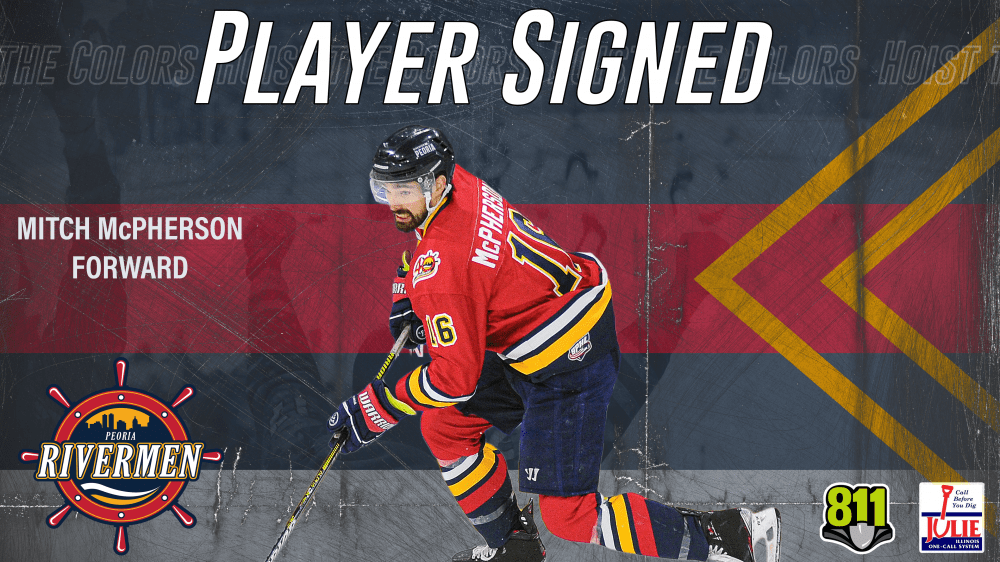 PEORIA, IL – The Peoria Rivermen announced on Tuesday that they have signed two SPHL veterans and a rookie to their roster ahead of the 2022-2023 season. Forward Mitch McPherson returns to the Rivermen and is joined by defensemen Eliott St-Pierre and Brendan St-Louis.

McPherson, a native of Peoria, returns for his fourth season of professional hockey and his fourth with the Rivermen. The 2021-22 campaign was statistically McPherson’s best, as he accounted for 22 goals and 15 assists for 37 points. In the playoffs, McPherson netted one goal and had four assists for five points en route to his first President’s Cup championship. McPherson played Division III  college hockey at Hamline University from 2015-2019 and before that spent four seasons in the North American Hockey League with the Texas Tornado and the Amarillo Bulls. He is the fourth veteran returner from the Rivermen’s 2022 championship squad, along with Alec Hagaman, Eric Levine, and JM Piotrowski.

St-Pierre, a native of Rimouski, Quebec, is entering his second professional season of hockey. St-Pierre started last year with the Evansville Thunderbolts before moving to the Huntsville Havoc where he would spend a majority of the season. In 29 games for the Havoc, St-Pierre accounted for just two assists but excelled in a defensive role, boasting a plus-20 on the blue-line. The 22-year-old rookie accepted a call-up to the ECHL’s Trois-Rivieres Lions where he played 11 games with the Montreal Canadians affiliate. Before making his American professional debut, St-Pierre spent four seasons in the Quebec Major Junior Hockey League and Maritime Junior Hockey League. St-Pierre is the first defenseman to be signed by the Rivermen for the coming season.

Brendan St-Louis, a native of Baie-Comeau in Quebec, is also entering his second year of professional hockey but will be statistically regarded as an SPHL rookie. St-Louis played in just one game for the Rivermen last year while suiting up with the Maine Mariners of the ECHL for 29 games. He garnered four assists across both leagues, including one with the Rivermen. Before making his professional debut, St-Louis played for two years in the QMJHL with Baie-Comeau Drakkar.