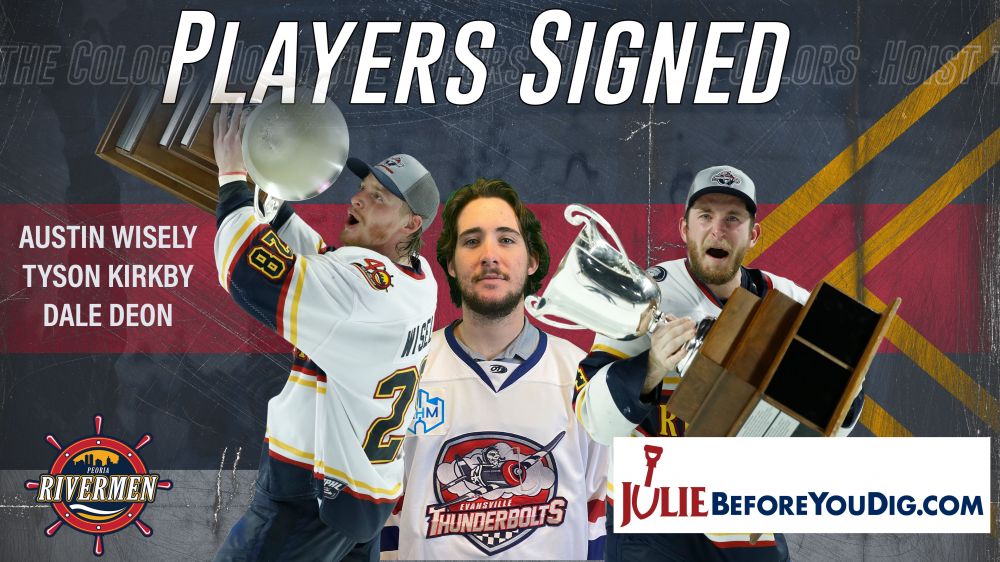 PEORIA, IL – The Peoria Rivermen announced on Monday that they have signed forwards Austin Wisely and Tyson Kirkby as well as defenseman Dale Deon to the roster ahead of the 2022-23 season.

Austin Wisely headlines the latest group of signings, a Peoria native and veteran of the Peoria Mustangs NA3HL program, Wisely spent four years at Hamline University from 2017-2021, playing division III college hockey. Wisely made his professional debut with the Rivermen during the 2021-22 season, in which Wisely netted four goals and 13 assists for 17 points in 36 games played. During the Rivermen’s President’s Cup run in the playoffs, Wisely was instrumental with two key goals in the first two rounds while adding on three assists for a total of five points. Wisely is the fifth returner from Peoria’s President’s Cup championship team.

Tyson Kirkby is a native of Prescott, Ontario, Canada. After spending five seasons playing junior hockey with the Central Canada Hockey League, Kirkby spent three years at the State University of New York-Oswego, netting a career total of 23 points while playing division III college hockey. Like his now teammate Wisely, Kirkby made his professional debut in 2021-22 in the Southern Professional Hockey League. Kirkby played 10 games with the Fayetteville Marksmen and a further 17 with the Evansville Thunderbolts. In his SPHL season debut, he netted six goals and 10 assists for 16 points in 27 games played. Kirkby ended the season in the Federal Prospects Hockey League with the Binghamton Black Bears, in just 14 games played, Kirkby tallied 26 total points (9 goals, 17 assists) in the regular season with a further five points in the playoffs.

Dale Deon is the first returning defenseman from the 2022 President’s Cup championship team to re-sign for this coming season. Deon, a native of Georgetown, Ontario, Canada. Deon boasts three seasons in the professional ranks with stints in both the FPHL and the SPHL with a number of teams from 2018-2021. This past season Deon played in 45 regular season games for the Rivermen including all ten playoff games, thus marking the longest time he has spent with one team in his professional career. Deon netted 21 points in the regular season (a career SPHL high and second most professionally) including five goals and 16 assists. During the Rivermen’s championship run Deon netted only one goal in the post-season but was a vital presence both on the blue line and in the locker room for the Rivermen. Deon is the sixth returner for Peoria from their President’s Cup championship team.