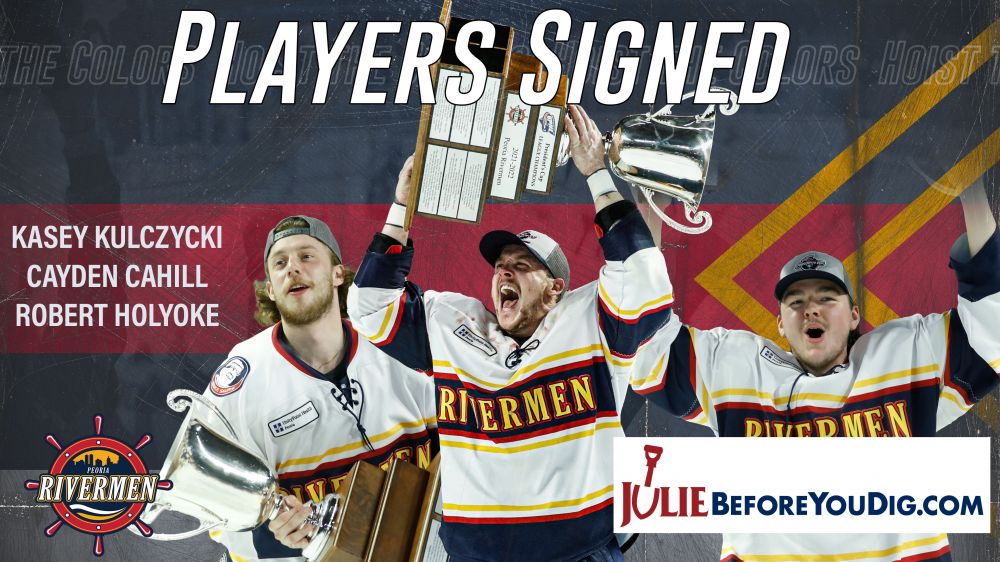 PEORIA, IL – The Rivermen announced on Thursday that they have signed three veteran forwards from last season’s championship squad. Kasey Kulczycki, Cayden Cahill, and Robert Holyoke have all signed with the Rivermen ahead of the 2022-23 season.

Kasey Kulczycki, a native of Laval, Quebec, is a four-year veteran of the Southern Professional Hockey League dating back to 2019. Kulczycki has played with the Birmingham Bulls, Knoxville Ice Bears as well as the Peoria Rivermen during his professional career. Kulczycki netted three goals for the Rivermen in just four games played during the 2021-22 regular season. During the Rivermen’s playoff run, Kulczycki netted three goals and one assist in nine games. Before entering the professional ranks, Kulczycki played four years of division III college hockey at the State University of New York-Canton.

Cayden Cahill, a native of Anchorage, Alaska, made his professional debut last season with the Rivermen playing in 8 games during the regular season plus three in the playoffs. Cahill netted a goal and an assist over the course of that span. Before entering the professional ranks, Cahill played division III college hockey for five years with the University of Wisconsin-River Falls and also boasts junior hockey experience with the Fairbanks Ice Dogs of the North American Hockey League.

Finally, Robert Holyoke made his professional debut with the Rivermen late in the 2021-22 campaign. Playing just four games across the regular season and playoffs, Holyoke accounted for just two penalty minutes but gained invaluable experience as a result. A native of Taunton, Massachusetts, Holyoke played division III college hockey for three years with Assumption College.