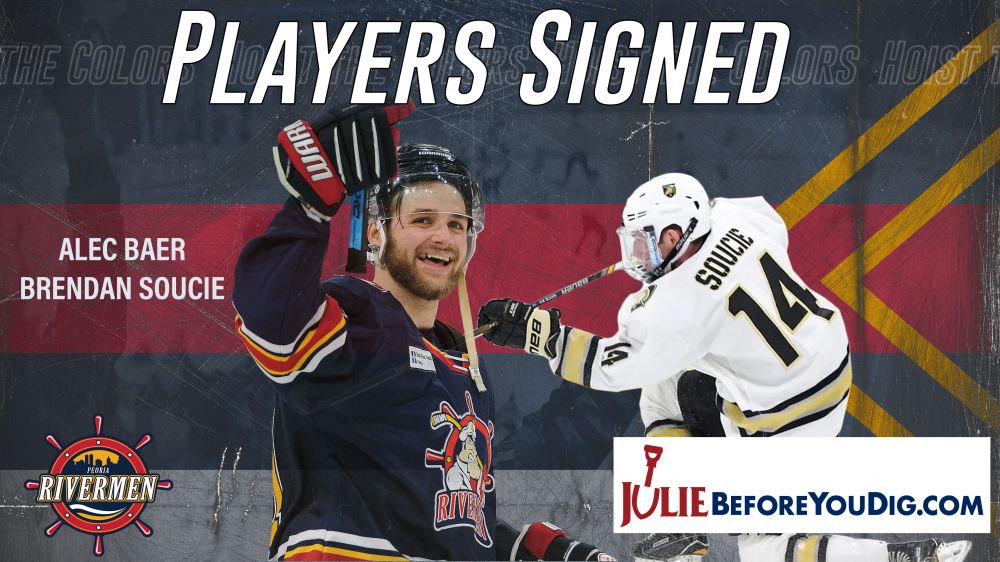 PEORIA, IL – The Rivermen announced on Saturday that they have added two forwards to their training camp roster. Alec Baer returns to the Rivermen following his league MVP performance last season while Brendan Soucie comes to Peoria following a year in the ECHL.

Baer’s return to the River City marks his third stint with the Rivermen in his last four years of professional hockey. Baer is coming off of an SPHL MVP performance in 2021-22 following a 26-goal and 54 assists (80 points) regular season. His stats easily earned him the title of leading scorer in the SPHL but was soon named league MVP at the start of the post-season. During the playoffs, Baer was instrumental in bringing the President’s Cup to Peoria, netting six goals and five assists in the postseason. He, along with forward Jordan Ernst, had one of Peoria’s two post-season hat-tricks, the first ever for the franchise in the SPHL era.

A native of St. Louis Park, Minnesota, Baer is entering his fifth year of professional hockey, having seen action in both the SPHL and the ECHL ranks. Baer becomes the 11th returner from the 2022 championship team now on the Rivermen roster.

Brendan Soucie, a native of South Dennis, Massachusetts, comes to Peoria after spending a full season in the ECHL. The 2021-22 season saw Soucie suit up for three separate teams in the Newfoundland Growlers, Maine Mariners, and Kansas City Mavericks. Soucie netted four goals and five assists for nine points over the course of the year. Soucie is no stranger to the SPHL, having spent a full season with the Birmingham Bulls in 2020-21, where he played with Alec Baer and Kasey Kulczycki. Soucie played his college hockey at the United States Military Academy at West Point where he had 61 points playing Division I College hockey with the Black Knights.