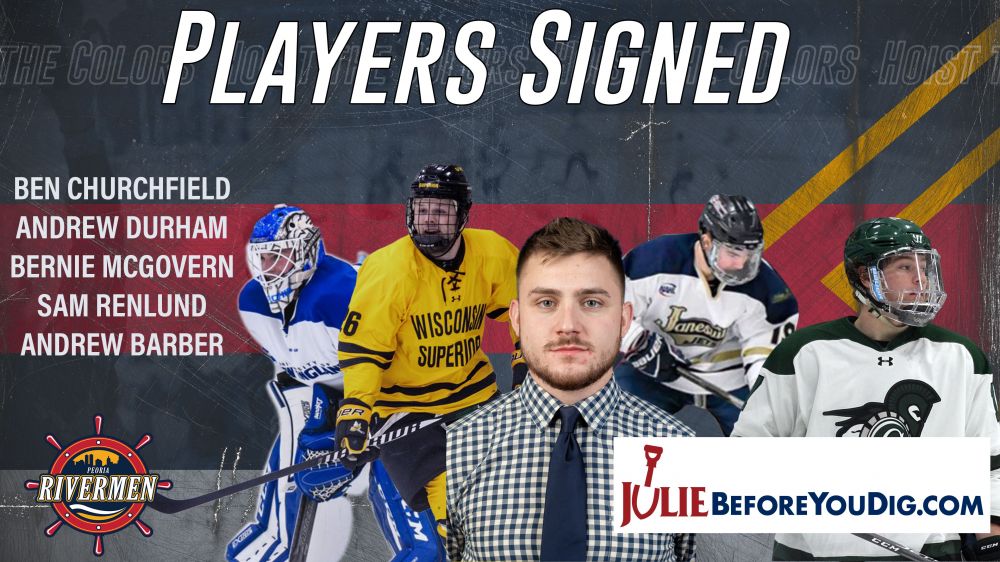 PEORIA, IL – The Rivermen announced on Friday the addition of five more players to the training camp roster. Forwards Sam Renlund, Andrew Durham, and Bernie McGovern have signed with the Rivermen along with defenseman Andrew Barber and goaltender Ben Churchfield.

A native of Verona, Wisconsin, Renlund comes to Peoria from the University of St. Thomas hockey program in Minnesota, before that Renlund played for a single year at another division I college hockey program with Colorado College. Over the course of his two years in college hockey, Renlund posted seven goals and 19 assists for 26 points. Renlund also boasts junior hockey experience in both the North American Hockey League and the United States Hockey League.

Andrew Durham, a native of Richardson, Texas, becomes the second Rivermen from the Lone Star State on the roster (along with JM Piotrowski). Following an auspicious junior career in the NAHL, Durham spent one season playing college hockey with the U.S. Military Academy at West Point before transferring to the University of Wisconsin-Superior. The switch to Division III hockey was beneficial as Durham netted 65 total points across his final three seasons. The 2020-21 year was Durham’s first in professional hockey playing three games with the ECHL’s Norfolk Admirals and two with the Macon Mayhem. Durham comes into this season statistically a rookie in the SPHL.

A rookie from Medford, Massachusetts, Bernie McGovern played four years of Division III College hockey at New England College.  Before that McGovern spent a single season with the South Shore Kings of the National Collegiate Development Conference. The 5’11, 190 lb forward will be making his professional debut with the Rivermen this season.

Defenseman Andrew Barber hails from Queensbury, New York, and will also be making his professional debut with the Rivermen. Barber spent four seasons playing Division III college hockey with Castleton University, netting 17 points in four seasons. A tall 6’1 defenseman in the mold of a Nick Neville, Barber played junior hockey with the Vermont Lumberjacks of the EHL from 2016-2018.

Ben Churchfield becomes the third goaltender to be signed by the Rivermen this season. Though fans may remember him as a mainstay of the Vermilion County Bobcats during the 2021-22 campaign. Churchfield boasted a .884 save percentage and a 4.48 goals-against average in 23 games in Danville. A native of North Shields in Great Britain, Churchfield spent 3 seasons with the University of New England and boasted a .926 saver percentage in his final two seasons. Churchfield joins the Rivermen for his second professional season in search of his first professional shutout.

Finally, the Rivermen completed a trade with the Macon Mayhem for Joseph Drapluk. Drapluk, a native of Pembroke Pines, Florida is entering his fourth year of professional hockey in the SPHL. His playing experience at the forward position includes stints with the Pensacola Ice Flyers and the Macon Mayhem. Drapluk is coming off his statistically best season in which he netted six goals and 11 assists for 17 points. Peoria acquired his rights from the Mayhem in exchange for future considerations.