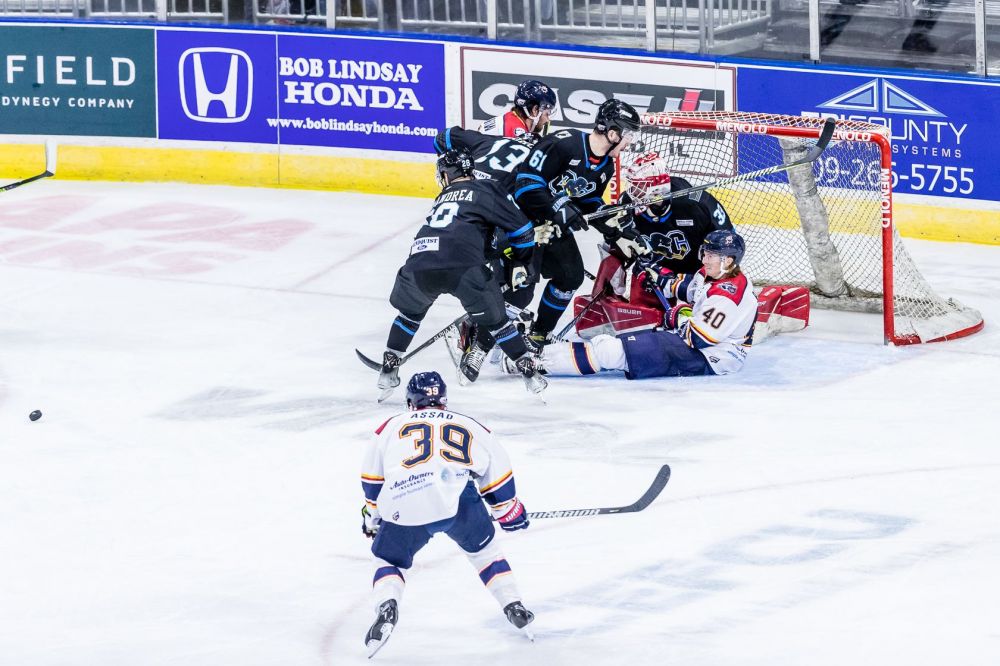 PEORIA, IL –  The Peoria Rivermen, coming off of a tough 6-2 loss in Quad City, looked to bounce back during the home opener Saturday night against the Storm. The night began celebrating the 2021-22 championship season that ended in the Rivermen winning their first Presidents Cup. But the Storm were eager to rain on the parade.

Similar to the night before, Quad City struck early with the first goal of the game at the 2:40 mark of the first period. Dillon Fournier scored his first of the season, assisted by Filip Virgili, his second assist of the year. The Rivermen were able to bounce back and have a strong second half of the period gaining momentum on a pair of power-plays, however, they were unable to cash in. At the 18:54 mark, things got a bit out of hand as Mitch McPherson and Taylor Pryce engaged in a scrum, resulting in a Quad City power-play.

The second period was much of the same. The Storm scored in the first minute of the second period on the power-play putting them up 2-0 on the road. Virgili notched his second goal of the season assisted by Logan Nelson and Connor Fries. Shortly after, Rivermen captain Alec Hagaman and Tommy Tsicos dropped the gloves much to the delight of the Rivermen faithful at Carver Arena. The rest of the period was back and forth, however, both teams were unable to put the puck in the back of the net.

The third period was all Peoria. They outshot Quad City 17-2 in the final period, Tyler Barrow notched a goal for the Rivermen after a quick pass from Hagaman found the new forward with 18 seconds remaining to bring the Rivermen back within one. A scrum broke out with 4 seconds remaining, resulting in an offensive zone draw and a power play for the Rivermen. The Rivermen won the draw and Nick Neville found Hagaman in the slot and Hagaman sailed the puck high. The buzzer sounded and the Quad City Storm escaped Peoria with a 2-1 victory. Quad City goaltender Bailey Brkin finished with 43 saves on 44 shots, while his counterpart Eric Levine finished with 28 saves on 30 shots.

Despite the loss, the Rivermen played solid hockey in the third period and were a good bounce away from tying the game. The team stayed together and rallied, unlike Friday night when their comeback effort was not up to the Rivermen standard. Saturday saw many good things that can be built off of moving forward.

The Rivermen are back on home ice next week for a Friday-Saturday weekend series against the Evansville Thunderbolts (1-1-0).