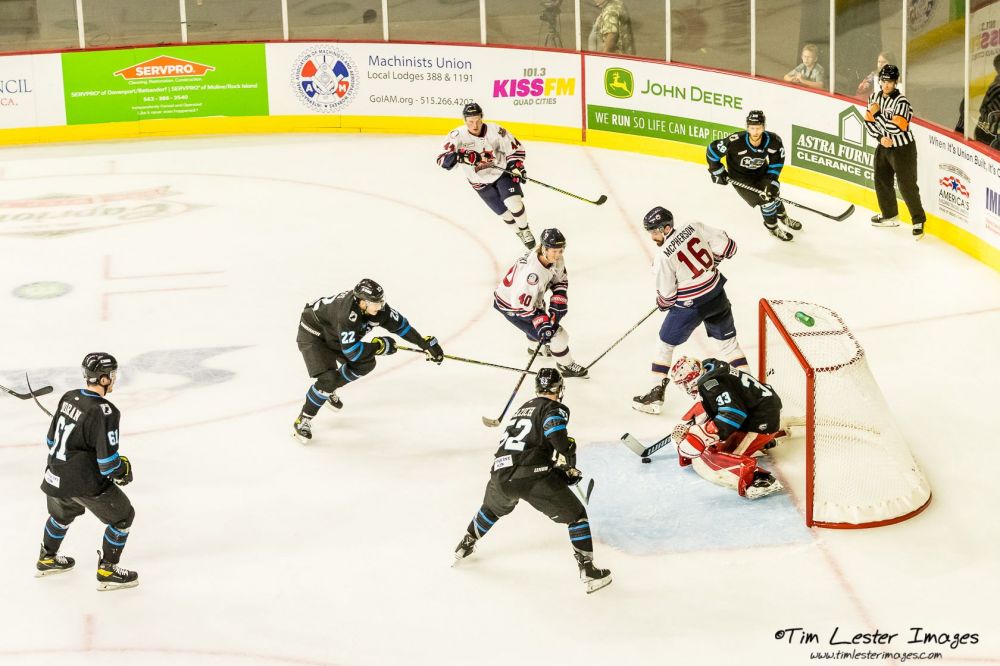 MOLINE, IL –  One game does not a season make. That is no doubt the message the Rivermen have been told following their 6-2 loss on the road at Vibrant Arena to the Quad City Storm on Friday night. Sure, it stings, but the important part is how you respond.

The Rivermen fell down early in the contest just over 5 minutes in off of a quick pass in front and found an open Storm forward in the low slot. In the final minutes of the first period, a massive fight erupted, centered around Zach Wilkie and Connor Fries. The bout didn’t last long but highlighted the animosity that both clubs carried over from last year.

The second period started with a Quad City five-on-three advantage that they capitalized on to take a 2-0 lead. Peoria was able to rally and get a goal of their own as Brendan Soucie was able to force a turnover in the offensive zone. Skating to his right, he fired a quick shot over the glove of Storm goaltender Baily Brkin to notch his first goal as a Rivermen and make it a 2-1 hockey game.

Quad City answered a few minutes later on a break-away rush, but the Rivermen responded with their first power-play goal of the season. A shot by Alec Baer, from the left circle, was partially blocked but produced a rebound on the short side and JM Piotrowski was right on the spot to bury to loose puck into the back of the net. It was Piotrowski’s first goal since his cup-clinching tally in May. The positive momentum only lasted about 17 seconds however as the Storm went down the ice on the ensuing shift and re-established their two-goal lead before adding another goal late in the second period.

A power-play tally in the early stages of the third period sealed the 6-2 victory. Peoria went 1-4 on the man advantage while Quad City went 2-6. There were some positives to be had from the game. The play of some of the newcomers, namely Soucie and defenseman Brendan St-Louis, stood out and showed very positive flashes. In addition, the fact that the final shots-on-goal tally was only 32-31 in favor of Quad City was evidence of the close nature of the contest despite the score.

Peoria will have plenty of opportunity to rest up and recover before having a chance to bounce back as they host the Storm for their home opener at Carver Arena on Saturday night at 7:15 pm.