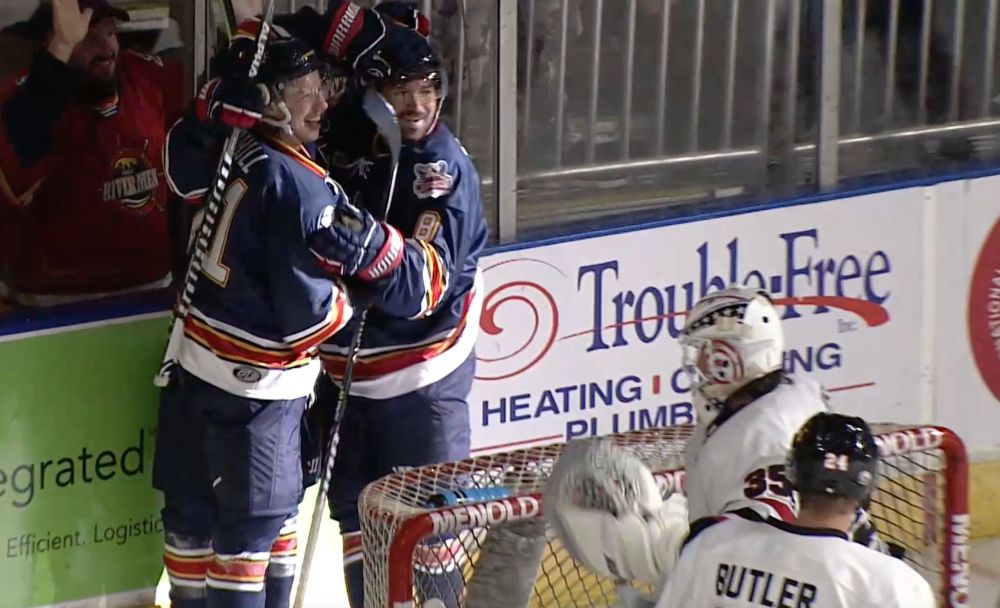 PEORIA, IL –  There’s something about playing at Carver Arena that brings out the best in players, whether it be hometown hero Alec Hagaman or fan favorite Zach Wilkie, their play clearly elevates when on home ice. Tyler Barrow might want to be added to that conversation now. Barrow’s two-goal night was exactly what the doctor ordered for the Rivermen to overcome the surging Evansville Thunderbolts 5-3 on Friday night to secure their first victory of the season.

After a scoreless first period, the Rivermen got to work in the second. So far this season the middle period has not been the best for Peoria. Not so on Friday. An early goal by Kasey Kulczycki, who deposited a rebound from Evansville goaltender Zane Steeves, ignited the Rivermen offense and got it humming. It marked the first time Peoria had scored first in a game all season and it allowed them to build momentum. Joseph Drapluk’s power-play goal extended the lead to 2-0 and marked the third straight game the Rivermen had scored on the man advantage.

Though Evansville split the lead in half midway through the second Tyler Barrow notched his first goal of the night off another rebound while on the power play to put Peoria back up 3-1. But less than a minute later, the Thunderbolts answered back to make it a 3-2 hockey game going into the third. The Rivermen out-shot Evansville 18-2 in the second period.

The third did not start well for the Rivermen as they surrendered the tying goal early, but Barrow was not about to let the game slip away. After Drapluk found the puck in the left-wing corner, he quickly fed a pass to an uncovered Barrow in the low slot. Barrow, with all kinds of time, pulled the puck to his backhand as he skated across the crease before shooting it over the outstretched glove of Steeves.

Barrow’s second of the night ended up being the game-winner as JM Piotrowski added on the empty net goal for good measure and the Rivermen skated to their first victory of the season with netminder Ben Churchfield earning his first win in a Peoria uniform.

Positives abound for Peoria in more than one department. They finished 2/7 on the power play and were a perfect 7/7 on the penalty kill. Newcomer Hank Sorensen notched three assists in his Rivermen debut and Peoria out-shot the Thunderbolts 34-21 in the contest. Now another test looms on Saturday as the Rivermen look to sweep the weekend against Evansville and get back to an even record. Face-off for Saturday is set for 7:15 pm.