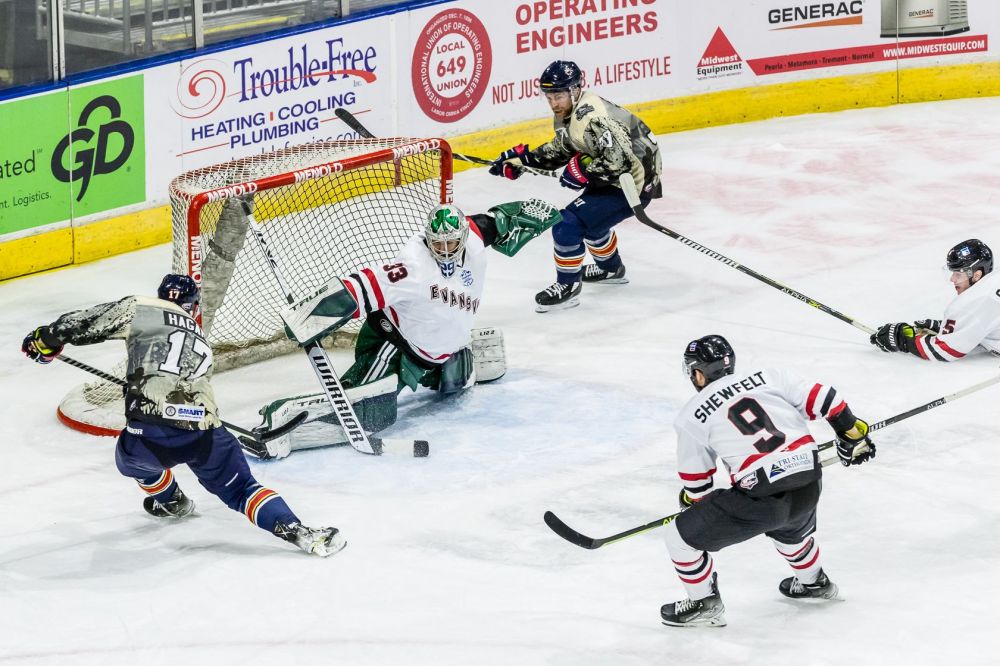 The Rivermen were able to get the first goal of the contest as Alec Baer took the puck from Hagaman, skated to the slot area from the left-wing circle, and fired a hard wrist-shot in past Evansville netminder Henry Johnson to put Peoria up 1-0. The goal also marked the first Rivermen goal in the first period this season. Five minutes later, however, Evansville was able to tie the game with a quick pass from behind the net. That goal ignited the Thunderbolts who nearly dominated the second half of the period, aided by two power plays. But the Peoria defense and goaltending stood firm and the two teams skated to a 1-1 tie after 20 minutes.

The second period was a fairly even affair with both sides getting good chances on net and both goaltenders making quality saves. As the Rivermen power play was expiring, Zach Wilkie skated up through center and streaked over to the left-wing side. Seeing Hagaman in the slot, he sent a pass to the captain who fired a change-up style shot low and into the net. The goal marked the first for Hagaman and put the Rivermen up 2-1 as the second period came to a close.

The third period was also filled with back-and-forth action that saw the Thunderbolts notch two goals to take a 3-2 lead. In the final minutes of regulation, Peoria pulled their goaltender in favor of the extra attacker. A shot came in from the right-wing side and produced a rebound high off of Johnson. It was right there where Kasey Kulczycki stood. He made no mistake and buried the rebound into the top shelf to tie the game at 3-3.

There was some adversity at the end of regulation as Peoria was assessed a delay-of-game penalty in the final minute that carried over into overtime. But the Rivermen held firm and killed off the penalty before going on the attack in OT. With just over 90 seconds to go, Ben Assad received a pass from Nick Neville as he stepped in over the line. Assad streaked to the right side and saw Hagaman pinching in behind the Evansville defense. Seeing a lane open up, Assad saucered a pass across to Hagaman on the back door and the reigning President’s Cup Champion made no mistake as he directed the puck into the back of the net for his second of the night and the overtime winner.

With the win, Peoria improves to 2-2 on the year and ends the month of October on a high note. They will prepare to hit the road against the Quad City Storm next weekend in Moline, Illinois.