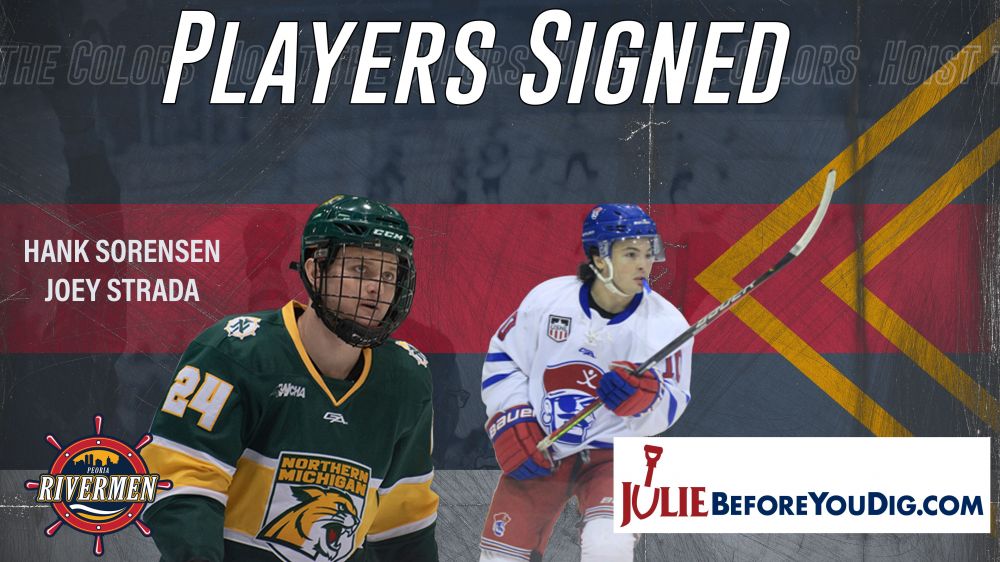 PEORIA, IL – The Peoria Rivermen announced on Thursday that they have completed several moves this week. They have completed a trade with the Macon Mayhem that sends defenseman Eliott St-Pierre to the Mayhem that satisfies a previous trade for future considerations. In addition, the Rivermen have signed defenseman Hank Sorensen and forward Joey Strada to the active roster.

Sorensen comes to Peoria after playing seven games in the ECHL with the South Carolina Stingrays in 2021-22. A native of Plymouth, Minnesota, Sorensen played division I college hockey for two years with the Wildcats of Northern Michigan University from 2019-21. Before entering the college ranks, Sorenson was a stable of the Waterloo Blackhawks defensive corps in the USHL for three seasons. Peoria will be Sorensen’s first team in the SPHL.

Strada is a veteran forward of the SPHL. Last season he suited up for three teams, Vermilion County, Knoxville, and Pensacola, playing in 39 games while netting 19 points (four goals and 15 assists) in that span. In 2020-21 he suited up in two games for the Huntsville Havoc. A native of Scottsdale, AZ, Strada played junior hockey for four seasons in the North American Hockey League and United States Hockey League before beginning his professional career.

Peoria has also completed a trade with the Macon Mayhem, sending defenseman Eliott St-Pierre to the Mayhem. The terms fulfill a previous obligation for future considerations that the Rivermen made in order to acquire Joseph Drapluk. St-Pierre played in one game for the Rivermen and was a -2 +/- with just one shot on net.