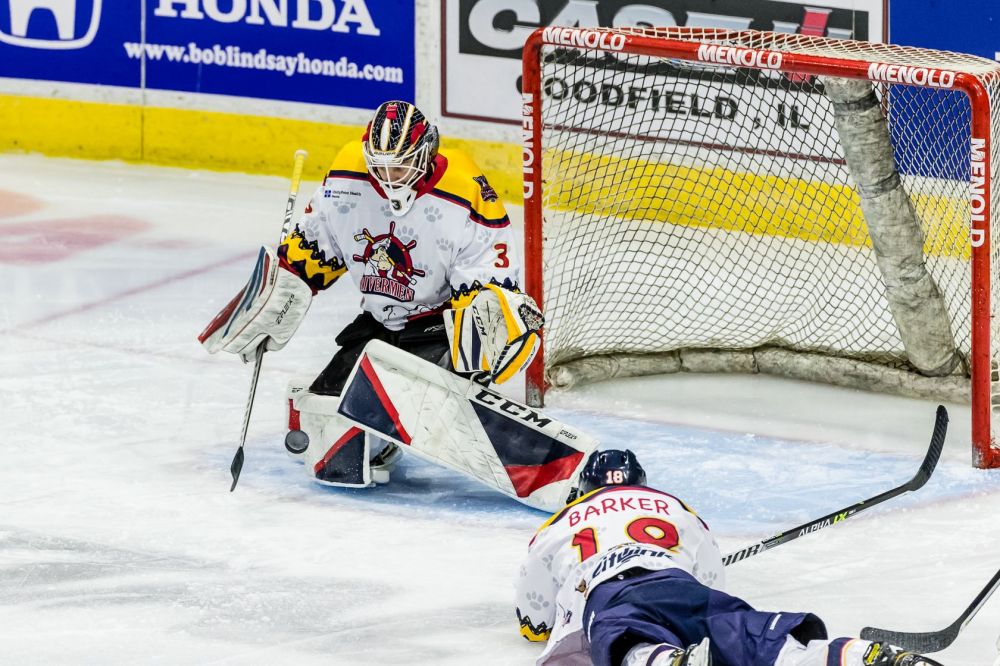 PEORIA, IL –  Goaltender Eric Levine made 20 saves and pitched his second shutout of the season on Friday night as the Rivermen defeated the Quad City Storm 3-0 at Carver Arena.

The first period was full of shots, especially Rivermen shots as they sent 17 shots on Quad City goaltender Baily Brkin in comparison to just four sent toward Peoria netminder Eric Levine. Despite the disparity in shots, both teams were scoreless after the first 20 minutes.

Period two saw the Rivermen jump out to a 2-0 lead as Jordan Ernst was able to will the puck over the goal line from a net-mouth scrum and Tyler Barrow skated coast-to-coast up the ice, split the defenders and fired a wrist-shot over the blocker of Brkin. With a 2-0 lead after two periods, the Rivermen were poised to take the game into the third period with a major power-play that carried over from the second period.

The third period saw the Rivermen capitalize on a later power play as Alec Baer received a pass in the left-wing circle and rifled a one-timed shot into the back of the net. Baer’s second in as many games marked Peoria’s sixth straight game with a power-play goal and it put the Rivermen on the road to victory. In total, Eric Levine made 20 saves to record his 15th career SPHL shutout, an ongoing record. It also marked his second shutout of the season, both of which have come against the Storm.

The Rivermen will close out the week on the road in Moline on Saturday night as they take on Quad City at Vibrant Arena. The face-off is set for 7:00 pm.