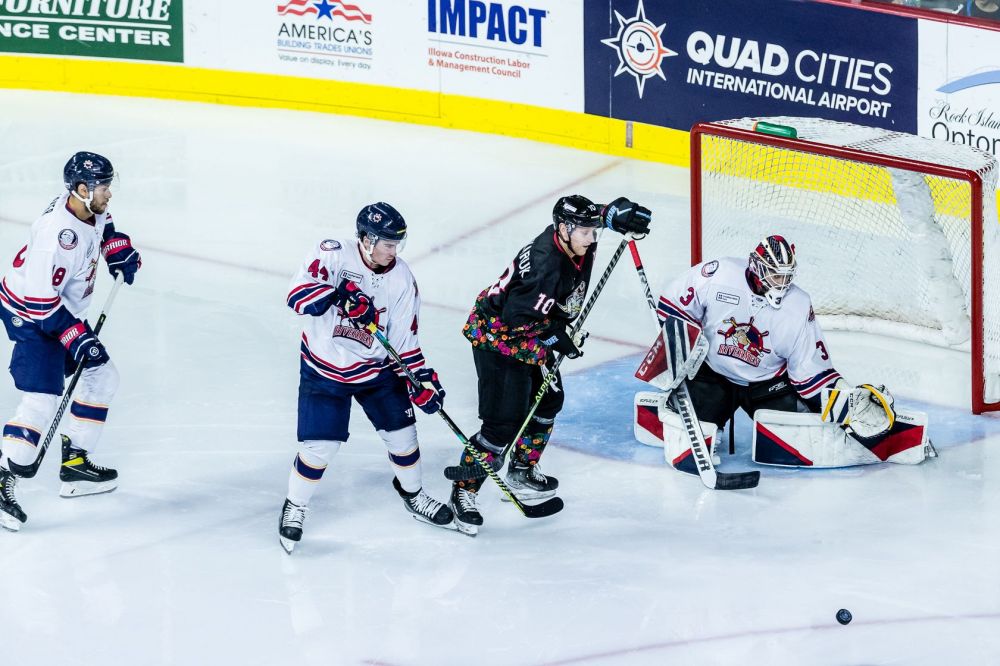 MOLINE, IL –  In the midst of a thunderstorm outside, it was all calm inside for goaltender Eric Levine and the Peoria Rivermen. Levine made 24 saves to record his 14th career SPHL shutout, a number that leads the league, all time. In the process, Peoria earned their first victory on the road and their first victory against the Storm this season following a 1-0 victory at Vibrant Arena on Friday night.

The Rivermen were able to take the lead just under five minutes into the contest as a pass from Tyler Barrow found Cayden Cahill in the slot and Cahill shot the puck off the cross-bar and into the net as he notched his first of the season to put the Rivermen up 1-0. It was a marked improvement for the Rivermen who turned the tables on a Quad City Storm team that prides itself on fast starts in the first period. The Rivermen held the Storm to just five shots in the first 20 minutes.

Peoria saw some controversy come their way as they were forced to kill off a five-minute major penalty early in the second period. Against the top power play in the league, the Rivermen were exceptional on the kill. They denied many scoring chances to the Storm and allowed goaltender Eric Levine to have clear sightlines to the puck. When the period was over, the Rivermen were still ahead 1-0, their penalty kill would finish with a perfect 3-for-3 on the night.

The third period was a defensive clinic as the Peoria defense stood tall at their own blue line and frustrated the offensive-minded Storm in the neutral zone. This allowed all eleven saves that Eric Levine was forced to make in the third-period routine. In the end, the game ended in the neutral zone after a Rivermen clear and the SPHL had a new all-time shutout leader in Levine.

The win is a big step for the Rivermen who have now scored first and won in three straight contests. Peoria will look for the weekend road sweep on Saturday night in Moline against Quad City.