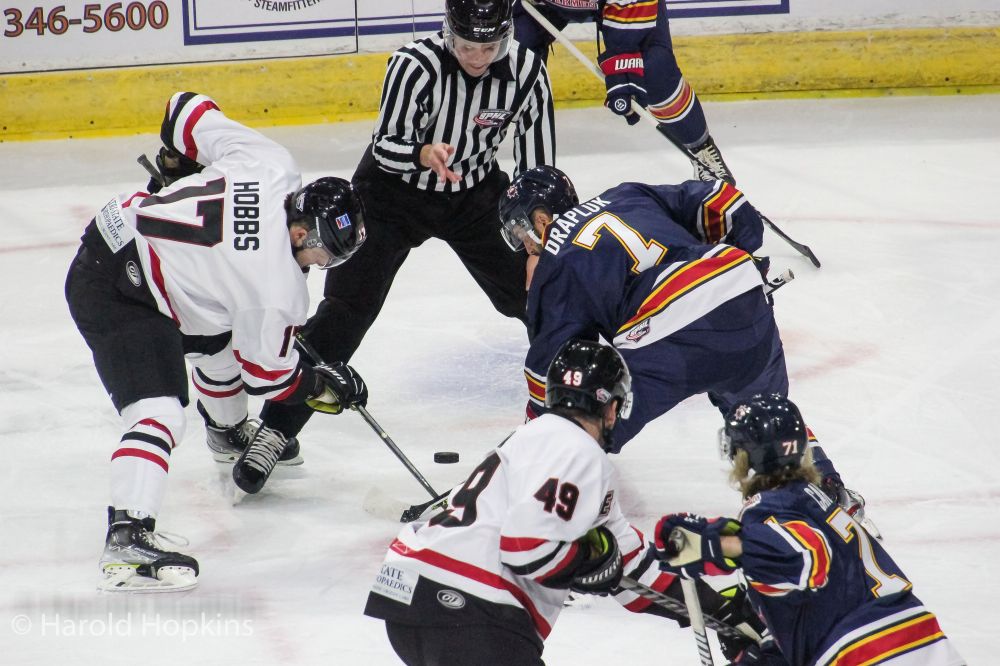 For the third game in three, the Rivermen surrendered the first goal of the game as the Thunderbolts, aided by three power plays, dominated the shots-on-goal 15-6 in the first period. Eric Levine made a number of big saves to limit the damage and keep the Peoria deficit to just 1-0.

Like most second periods this season, the Rivermen found a way to respond to first-period adversity. Alec Hagaman was able to tie the game after a shot by Alec Baer produced a rebound and Hagaman just wrapped the puck around the pad of Evansville netminder Chase Perry to record his fifth goal of the season. Evansville responded with a power-play goal to the game but the Rivermen were not ending the period without some magic. In the waning seconds of the second period, a goalmouth scramble saw the puck come free to the low slot for Cayden Cahill. Wasting no time, Cahill fired the puck through the multiple bodies in front and into the back of the net to tie the contest 2-2 with just 15 seconds to play in the second. Cahill’s goal was a critical one as it gave the rivermen confidence and momentum heading into the third.

The third period worked much in the same way as the second. Evansville found another go-ahead goal off a deflection in the first five minutes but Peoria answered back. On a five-on-three power play a shot from the slot produced a rebound, Hagaman swatted at the puck with his stick but he too was stopped and the puck careened over to Baer at the base of the left-wing circle. Baer, with the goalie down and out, fired the puck into the back of the net to tie the game 3-3. Baer’s third of the season forced the Rivermen into overtime, where they were unable to find the winning goal. Instead, it was Evansville who scored on a two-on-one in a somewhat similar play to the one that saw Alec Hagaman get an overtime winner nearly three weeks ago. The Rivermen despite their heroic efforts were forced to settle for just one point.

Though the loss stings the Rivermen gained ground in the standings and improved to fourth place overall behind Knoxville, Evansville, and Quad City. Peoria will be idle for Thanksgiving before meeting the Quad City Storm for the first of a two-game, home-and-home set starting on Friday at Carver Arena.