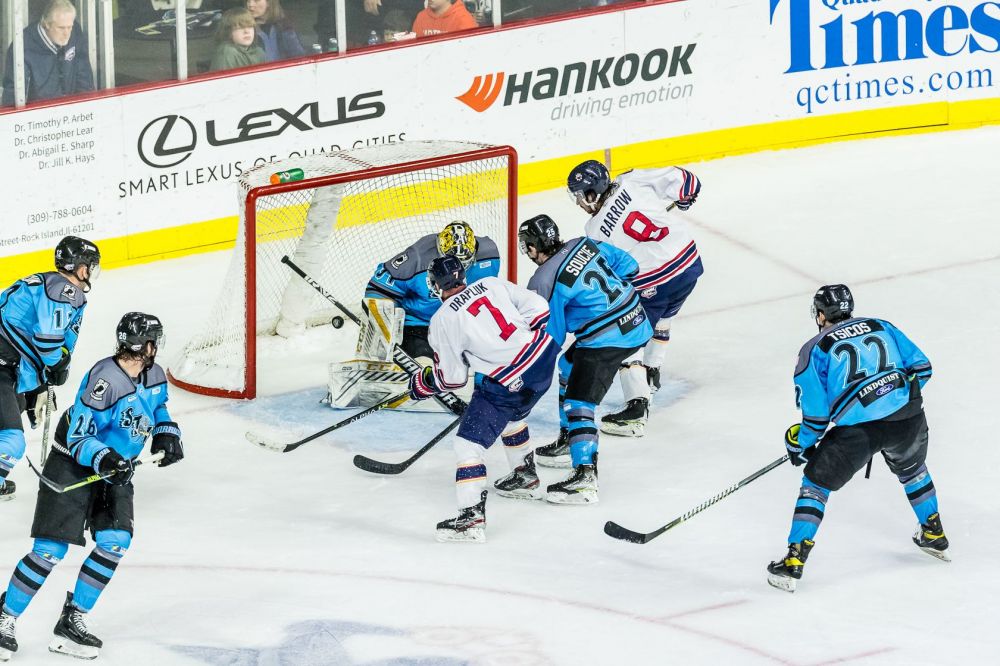 The Rivermen faced plenty of adversity in that first period as they battled missed calls and controversial goals. Back-to-back power-play goals by the Storm, including one that came after the puck deflected out of play and then back in play, put the Rivermen down 2-0 early. But the rivermen surged back and were able to get on the board late in the period. Joseph Drapluk skated up ice from the center and quickly fired a shot just under the crossbar that became his second goal of the season the pull the Rivermen within one, trailing 2-1 after the first period.

The back-and-forth action continued in the second period as both teams looked for the next goal. Both sides had power plays but could not find the back of the net. Then, the key goal came in the late stages. Taking advantage of a turnover in the left corner, Alec Baer picked up the puck and stickhandled into the low slot. Wasting no time, Baer fired a quick-wrister over the glove of Quad City goaltender Kevin Resop. Baer’s fifth of the season marked his fourth goal in four games and tied the contest at 2-2 going into the third period.

Once again, the Rivermen skated well in the third period, much like they have for most of the year. They continued to pressure the front of the net and get opportunities. Eventually, their resilience and persistence were rewarded. Cayden Cahill took the puck behind the net and then drifted to the left-wing circle. As he sent a turn-around shot towards the front, the puck was deflected by Drapluk’s stick and in past Resop. Drapluk’s second of the night put the Rivermen on the path to victory as the Storm pressed but could not find many chances offensively.

Peoria held firm for their fourth consecutive victory on the road and eighth in their last ten games. The Rivermen will get set to host the Vermilion County Bobcats for a home-and-home weekend on December 2 and 3. The face-off for the home game on December 2 will be set for 7:15 pm.