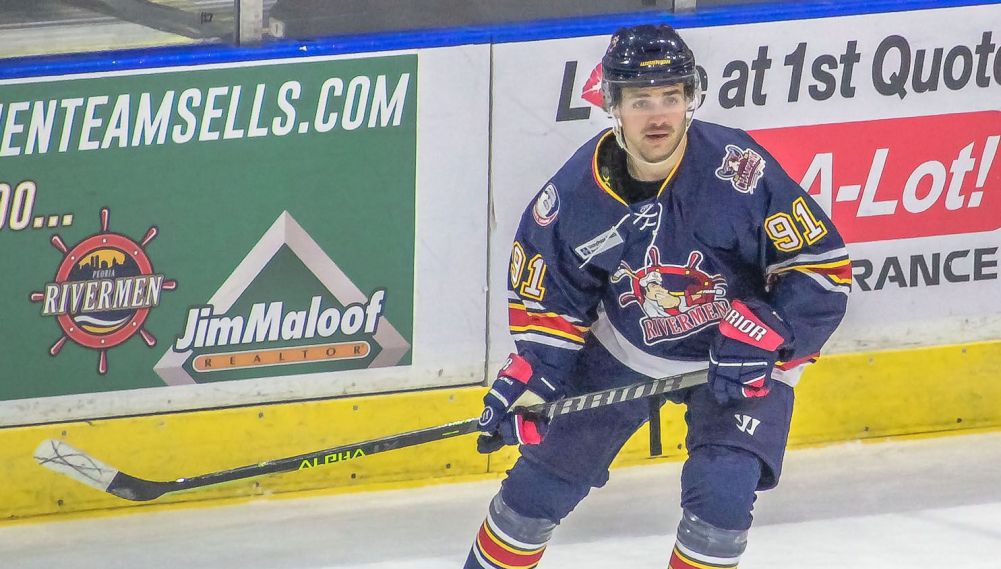 PEORIA, IL –  Despite some setbacks, a short bench, and a pesky opponent the Resilient Rivermen defeated the Quad City Storm 9-4 thanks in part to Alec Baer’s first hat trick of the season.

Just like Thursday night, the Rivermen jumped out to a 1-0 lead. While on the power play Alec Hagaman sent a quick pass to the low slot that found Alec Baer on the back door. Baer made no mistake and deposited his 10th goal of the season. The Rivermen extended this lead to 2-0 off of a Marcel Godbout goal. After a shot by Austin Wisely was blocked, the puck deflected to Piotrowski on the right side. Instead of shooting, Piotrowski sent a quick pass across to Godbout who fired the shot home. Quad City got one back on the power play as the Rivermen took a 2-1 lead into the second period.

Quad City was able to tie the game at 2-2 on a power-play tally early in the second period. But just 15 seconds later the Rivermen responded as the Rivermen arere moving up on an odd-man rush, Alec Baer sent a pass into the low slot that deflected off of a Quad City skate and into the net. Baer’s second of the night put Peoria up 3-2 but the Storm fought back to tie 3-3 on another power-play goal.

The third period was all Rivermen. Outscoring Quad City 6-1 in the 3rd period. The Rivermen scorers included Tyler Barrow, Baer, Nick Neville, JM Piotrowski, and Ben Assad. Barrow started the scoring just five minutes into the 3rd period as he fired one home in the left faceoff circle. Quad City would answer with their only goal of the period. However, that was met with a quick response by Baer, as he notched his 3rd of the game, resulting in the fedoras flying at Carver. The Rivermen then scored the next 4 goals in a span of 3:35 to make it a 9-4 game, which is how the game ended in front of the 2,886 Rivermen faithful.