Despite 2-0 Lead, Rivermen Fall 4-3 to Storm in Overtime 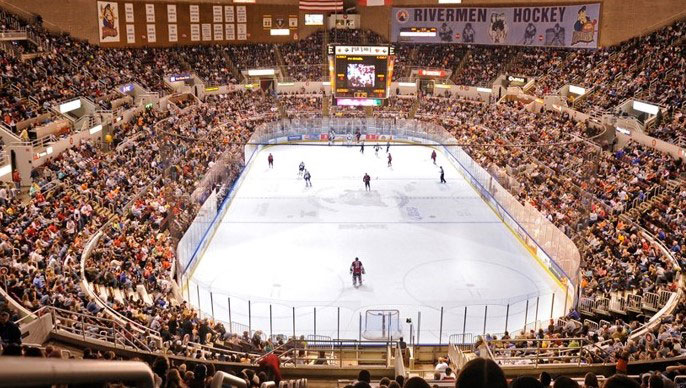 PEORIA, IL –  It was a raucous crowd, 6898 strong packed Carver Arena for the annual Rivermen education day to watch the latest chapter of the War on I-74 play out. Despite an early lead, the Rivermen fell to the Quad City Storm 4-3 in overtime on Thursday morning.

Peoria found the first goal of the game as a long pass from Brendan St-Louis found Alec Hagaman streaking up the middle. Hagaman, upon receiving the pass split the defense on a breakaway. All alone on goaltender Bailey Brkin, Hagaman beat the netminder with a quick backhand-forehand deke to tuck the puck around Brkin’s outstretched pad. Peoria held on to their 1-0 through the first period.

The second period saw back-and-forth action with the Rivermen killing off an extended five-on-three disadvantage but aided by the cheers of 6,878 students and fans the Rivermen persevered to hold on to their 1-0 lead going into the second intermission.

Peoria extended their lead to 2-0 just seven seconds into the third period, right off the face-off Carter Roo stepped in over the line to the left side, toe-dragged a defender out of position before rifling a shot into the back of the net for his third of the season and first as a Rivermen. But despite being down 2-0, the Storm continued to press the attack and was rewarded by two goals to tie the game, including one on the power play, that knotted the game up 2-2. Austin Wisely recaptured the lead for the Rivermen off of a quick shot in the high slot but this was also answered by Quad City who forced the game into overtime tied 3-3.

It only took 67 seconds for a short-angle shot from the right side to find its way into the Rivermen net and for Quad City to complete their comeback.

Despite the loss, the Rivermen gained a point in the SPHL standings and will have a chance at payback on Friday night as they host the Quad City Storm at 7:15 pm at Carver Arena.