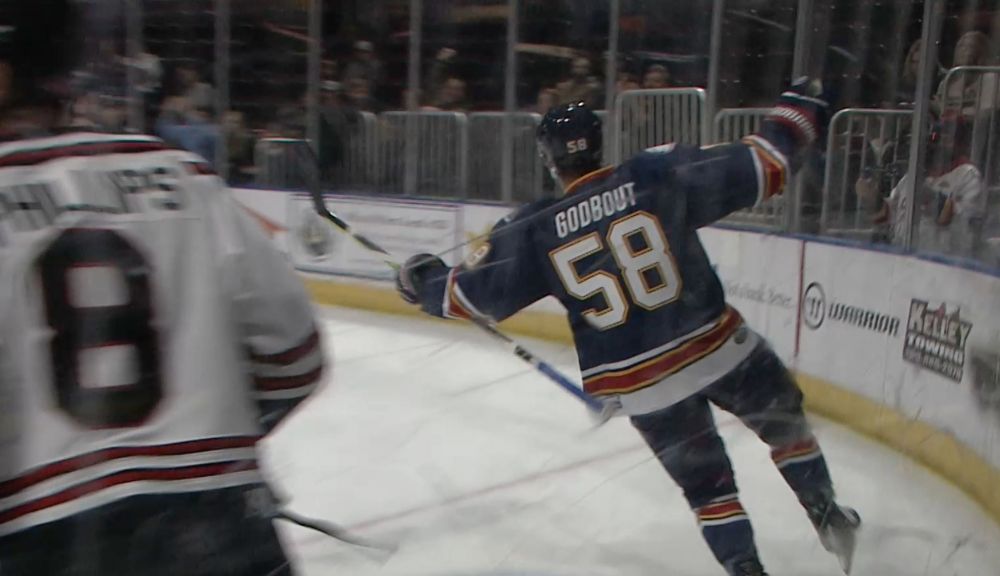 PEORIA, IL –  Alec Baer, Marcel Godbout, and Cayden Cahill led the charge for the Rivermen with multiple goals apiece as the Rivermen dominated the Huntsville Havoc 10-3 on home ice on Friday night.

The Rivermen had a strong start for the second straight game as Joseph Drapluk was able to force a turnover in the Huntsville zone and sent a quick pass to Cayden Cahill on the doorstep, Cahill’s initial shot was saved but it produced a rebound and he made no mistake the second time to put the Rivermen up 1-0. Alec Baer put the Rivermen up by two more two quick goals, the first coming off of a broken play as Baer refused to give up after his shot was saved, he picked up the rebound skated around behind the net, and rifled in a turn-around shot as he skated to the right circle. The second goal came after a quick wrist shot from the high slot. Baer’s two goals marked his seventh straight game with at least one goal and ninth straight with a point, the longest streaks in the SPHL this season. But the Havoc were able to come back with two goals to close out the period and the Rivermen lead was just 3-2 after 20 minutes.

With the game in the balance going into the second period, the Rivermen took over. Marcel Godbout was able to notch his first of two goals on the evening after stickhandling out of a double team from the right half-boards. Godbout then skated to the slot and unleashed a hard wrist shot that ricocheted off of both posts and into the net to make it 4-2 Rivermen. Mitch McPherson got involved in the scoring as he deposited a rebound to record his fifth goal of the season before Godbout added another goal on a wicked shot from the base of the right circle that found the top corner to make it 6-2. Jordan Ernst extended his scoring streak to three games after a net-front play on a scramble that saw Ernst earn his fifth goal of the season. Ben Assad scored Peoria’s first short-handed goal of the season as he was the late-man on a three-on-two. Hagaman was able to saucer a pass to Assad in the slot and the Calgary native sent a quick shot in past backup Huntsville netminder Hunter Vorva to put the Rivermen up 8-2.

Though Huntsville added on one more goal to start the third period the Rivermen capped it off with two more to end the game. JM Piotrowski capitalized off a feed out in front to notch his first of the game and Cayden Cahill, who started the scoring finished the evening off with his second of the night off of a turnaround shot that put the Rivermen up 10-3. It stands as the largest offensive output by Peoria since April 2 of 2022.

The Rivermen will look for the weekend sweep on Saturday night against the Havoc in their second straight home game, face-off is set for 7:15 pm.